What is the Difference Between Free Safety and Strong Safety? 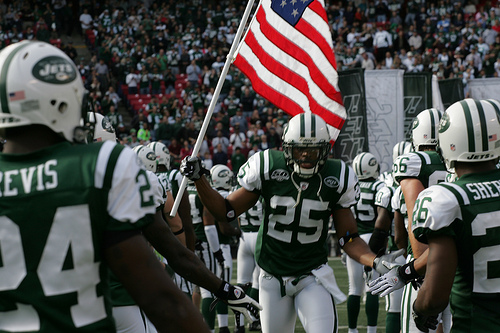 You may have heard the term strong and free safety used interchangeably and been confused. What exactly is the difference between a free safety and strong safety?

Frankly, depending on the scheme, there may be zero difference. In American Football today, particularly at the NFL level, many teams don’t have separate positions for strong and free safety. Rather, they have right and left safety positions. The two positions have basically the same responsibilities, just on their own side of the field. This can have the two safeties used interchangeably. If this is the case, they both need good all-around skills in run and pass defense.

For teams that still used the traditional free and strong positions, they can still be used interchangeably in certain situations. However, each position has different responsiblilites. Most defensive schemes will have them used in slightly different ways and that is usually determined in part by the individual abilities of the players. Some of these general differences can be seen below.

In general, the strong safety is the bigger, and more physical of the two and can look like faster, undersized linebackers. The free safety is usually smaller and faster and often look like slightly oversized cornerbacks. You’ll see wide variations of this though. In the NFL, it is not uncommon for the safeties to be a similar build, or even for the free safety to be bigger. The actual football ability of the two is more important for determining positions.

Strong safeties usually have the bigger job in run support. They can move around on the defense and line up closer to the football when the defense is looking to make it harder to run. The free safety, meanwhile, will line up farther away from the line of scrimmage and look to prevent big plays in the running game, as they are the last line of defense. When the offense has a running formation and personnel on the field, the strong safety can creep up as a fourth or fifth linebacker.

Pass coverage skills are as unique as run support skills for safeties. The free safety is usually much more skilled in pass coverage and can be used in different ways. You’ll often see them match up in man-to-man coverage against running backs or slot receivers if a 3rd cornerback isn’t brought onto the field. A strong safety is less likely to cover speedy targets and instead may be matched up on bigger targets, like the tight end.

In zone coverage, they often have similar roles. For instance, in cover 2 defense, each safety will take a deep half of the field. Their job is to not let any receivers get deeper than them and to make plays on the football when it is thrown in front of them.

Safeties of either kind are important to the success of a defensive secondary. The difference between free safety and strong safety ultimately comes down to the defensive scheme that is run and the individual abilities of the two players.