Inside and Middle Linebacker Drills: The Complete Guide

Both 3-4 inside linebackers and 4-3 middle linebackers have a similar role in the defense. ​They are often relied on for play-calling, stuffing the interior run, pass coverage, and making stick tackles all over the football field. 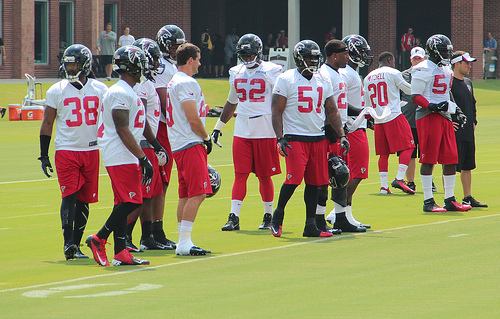 Interior linebackers need to be able to control the middle of the football field, and that starts with stopping the run. Fundamentally sound run stopping begins with a proper stance and also includes reading your keys, reacting to your assignment, slipping blocks, and closing on the football.

The shuffle, read, run drill incorporates all aspects of a middle linebackers run stopping responsibilities in a non-contact drill. This helps them go through a progression of what to read and react to on a running play to mentally prepare them for game day.

It begins by focusing on a proper linebacker stance and works on reacting to the snap of the football. When the defender sees the ball carrier, he attacks the line of scrimmage at the proper angle to be within range of making the tackle. ​It is important to stay on the back hip of the back when pursuing, so all cutback lanes are closed.

Getting in the right positions to make the play is a big part of shutting down an opponent's running game. The drill seen in the video below works on reading keys to find where a running play is headed.

The drill allows for 3 different running plays as scenarios for the offense - an iso up the middle, an outside toss sweep play, and a swing pass. The defender must be able to read how the play is developing, react to it, and then attack the running back. ​

It doesn't matter how great a defender is at reading his keys and finding the football if he just gets engulfed by an offensive lineman or lead blocker. This drill works on attacking blockers and shedding them in the most efficient way possible.

You can see what the drill looks like in the video below. As the blocker attempts to engage the defender, the defender attacks the outside shoulder and shed the block. This can be done in more advanced ways at higher speeds. You can also work more shedding techniques like the rip, swim, or spin. ​

When middle linebackers drop into coverage, they are usually going to be matched up with an offensive player who is faster than them, be it a running back, wide receiver, or tight end. Because of this, proper fundamentals are crucial.

While most schemes aren't going to have a backer matched up with a wide receiver in man coverage, they might have to cover them occasionally in zone or be stuck in man coverage against a speedy running back or tight end. ​

One on One Man Coverage

Inside linebackers will typically get matched up with either a fullback, tailback, or tight end in coverage, although some schemes will occasionally require the to match up with a slot receiver.

The drill below works on man coverage techniques in the most obvious way - one on one drills. The linebacker attempts to stay with the receiver on the play while also reading the quarterback and finding the football.

Pass coverage begins with a proper drop. At the snap of the ball, the linebacker begins by taking a step forward to check his gap to see if there are any run stopping responsibilities. Once he determines it is a pass play, he drops into coverage.

In this drill, the linebacker drops back into coverage to wherever is designated as his responsibility. In this case, he is covering the middle of the football field. He follows the quarterback's eyes to see where he is looking and what eligible receivers are entering into that zone. ​

While not all inside linebackers get many chances to rush the passer, it is an important skill that can put pressure on the offensive lineman. This drill teaches a progression of fundamental blitzing skills.

The drill can be done with a coach or athlete holding a pad. The linebacker works on the technique needed to get around a blocker, beginning with non-contact ways to slip by and can be progressed to the point where all pass rush moves are used. This can includes swims, rips, speed, bull rushes, and much more. ​

Speed and instincts mean nothing if you can't bring the ball carrier to the ground. Proper tackling technique is important to reel in speedy backs and receivers as well as to do it safely and not put your body at extra risk of injury.

Before making full speed tackles at game speed, linebackers must be able to repeat the proper form needed to make stops. This drill works on all aspects of tackling, from finding the football, to breaking down and wrapping up with proper technique.

The drill uses several pads and a tackling dummy. It follows progression and has the defender stop at multiple points to make sure they are positioned properly at each stop to make a good form tackle.

This drill works on getting through traffic and finding the football to make a tackle. The linebacker must use proper footwork to get through the padding, find the football, and bring the pad to the ground.

You can see in the video below how the defender has to pass through multiple obstacles that simulate shedding a block and then getting through traffic. This adds a degree of difficulty and more closely simulates the type of positions they will be in on game day. ​

In zone coverage, a linebacker must be able to read the quarterback and break on the ball when it is thrown. This drill works on dropping into the flat, breaking on the football once the pass it made, and then getting into proper tackling position.

The drill begins with the inside backer lined up in their normal position. At the snap of the football, the sprint to a 10 yard deep drop into the flat. The linebacker should keep his feet moving and his eyes on the quarterback. When the pass is made, they sprint to the football to make the tackle. ​

Interior linebackers rely on proper fundamentals for everything from reading the fullback to rushing the passer. They must be skilled in stopping the run, man and zone coverage, pass rushing, and tackling to be a complete football player. These middle and inside linebacker drills cover all the major areas that a linebacker needs for success.