Every year before the NFL Draft, hundreds of the best college football prospects in the country gather for the NFL Combine to test their physical ability. What are all the drills that they run?

Below you will find the entire NFL Combine drills list, with an explanation and video example of each. ​ 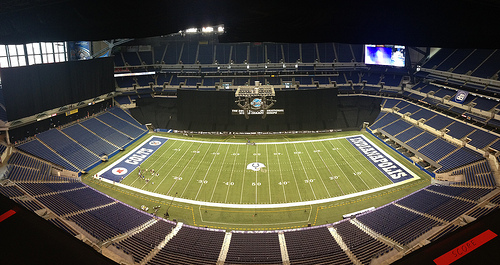 The 40 yard dash is pretty simple. You line up, get set, and sprints 40 yards hoping for the fastest time possible. For better or worse, this is the most hyped drill at the combine and it is crucial for so many prospects.

Please don't pay attention to unofficial or hand timed results, they mean nothing. There is just so much human error involved in it. The technology is there to have automatic timing systems with official results, so only pay attention to those.

Chris Johnson, a running back from East Carolina, ran a blazing 4.24 second 40 yard dash at the 2008 combine. Johnson would go on to become a first round pick, number 24 overall, by the Tennessee Titans. You can see video of his sprint below. ​

​The bench press is also pretty simple. There is a barbell with weights totaling 225 pounds, and you attempt to lift it as many times as you can.

Stephen Paea, a defensive tackle from Oregon State University, went 49 reps with the 225 pound weight in the bench press in 2011. Paea became a second round ​draft pick, number 53 overall, by the Chicago Bears.

The vertical jump test is a great way to measure explosion. The standing vertical jump measures how high an individual can jump straight up in the air.

Chris Conley, a wide receiver from the University of Georgia, had a vertical of 45 inches at the NFL Combine in 2015. He was later selected in the 3rd round, with the 76th overall selection, with the Kansas City Chiefs. You can see video of Conley's vertical and broad jumps below.​

Broad jump is another great test for measuring explosive power. Rather than jumping for height, like in the vertical, the broad jump measures jumping distance.

Byron Jones, a cornerback from Connecticut, ​went 12 feet and 3 inches in the broad jump at the 2015 combine. The Dallas Cowboys selected Jones with the 27th overall pick in the first round. You can see Jones' leap below.

​The 20 yard shuttle, or short shuttle, measures agility, change-of-direction, and acceleration. A total of 20 yards is covered. The athlete starts at a cone in the middle, sprints 5 yards to one cone, turns and sprints 10 yards to the other, and finishes with a 5 yard sprint to the first cone in the middle.

​Kevin Kasper, a wide receiver from Iowa, ran the 20 yard shuttle in 3.73 seconds at the 2001 combine. Kasper would be drafted in the 6th round, at number 190 overall, by the Denver Broncos. Here is a sample video of the 20 yard shuttle.

The 3 cone drill also measures agility, change-of-direction, and acceleration. 3 cones are place 5 yards apart in a right angle. The athlete begins at cone A and sprints ahead to cone B, then backpedals back to A. Then, the athlete runs around cone C and completes a figure 8 back to the starting position.

Jeff Maehl, a receiver from Oregon, ran the 3 cone drill in 6.42 seconds at the 2011 combine. Maehl signed with the Houston Texans as an undrafted free agent and spent time with the Texans and Eagles. You can see video of a 3 cone drill below. ​

Brandin Cooks, a wide receiver from Oregon State, ran the 60 yard shuttle in 10.72 seconds at the 2014 NFL Combine.​ Cooks went on to become the 20th overall choice in the 1st round of the draft by the New Orleans Saints. You can see an example of the 60 yard shuttle below.

Position drills are another important part of the NFL Combine, though they can't be measured with an objective score or time. The specific drills you do are - obviously - based on your position. So quarterbacks do pocket work and passing drills, receivers run routes and make catches, and so on.

The importance of these tests are dependent on the athlete being evaluated and the scouts that are evaluating them. One commonly brought up test is for 4-3 defensive ends who may be converting to a 3-4 outside linebacker. Scouts usually want to see their ability to drop into coverage and see how smooth and fluid they look doing so.

You can see examples of quarterback position drills in the video below. ​

Interviewing with teams is obviously crucial. In this, you spend 15 minutes getting interview by team personnel and then rotating to another team.

The physical measurements get official numbers on height and weight. The Medical and injury evaluation consists of meeting with doctors and having your medical history examined. ​

The Cybex test in a joint movement screening. The Wonderlic test receives about as much hype as a written test can. ​It is a cognitive test consisting of 50 multiple-choice questions, with only 12 minutes to respond. It was originally used to be a predictor of ability to process information quickly on the football field. The only problem with this is that you get an average of almost 15 seconds per question. On an NFL field, decisions are made in fractions of seconds.

The validity of these drills predicting NFL success is questionable, at best. But there is no denying that they play an important part of the pre-draft evaluation of NFL prospects at all positions. Prospects must allow themselves to have the best possible results in these tests to position themselves in the best situation for their future.