What is the Tight End Position in American Football? 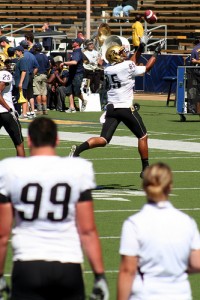 The tight end position is unique in American football because it generally has equal responsibilities in the running and passing game.

So what is a tight end and what exactly do they do? Tight ends are hybrid blockers/receivers that generally line up on the line of scrimmage, attached to the offensive line. As offenses have gotten more creative, their roles have grown and many are moved all around the offensive formation to create mismatches. Tight ends are generally tall, 6’3″ in height or more and well-built, between 240 and 270 pounds. They also are usually very athletic for their size, allowing them to be used as targets in passing plays. Their size also makes them excellent red zone targets.

There has been increased need and roles for tight ends in the NFL in recent years. The move towards more pass-first offenses and the use of tight ends as key receiving threats has increased. Big and fast tight ends can be mismatches for any defender. The ideal athlete is too fast for a linebacker in coverage and much too big for a cornerback or safety. As offenses have gotten more creative, tight ends are used all over the formation to find the best matchup. They can be used in the traditional in-line tight end spot, move around like an h back, line up in the backfield like a fullback, line up in the slot, or even split out wide.

The New England Patriots even drew extra attention by experimenting with using four tight ends on the field at one time. While that is not a base offense, the formation could give defenses fits, as all four players are capable of blocking or going out as targets in the passing game.

At the high school and collegiate levels, the role of the tight end position is very dependent on scheme. In run-heavy offenses, they may be little more than a glorified 6th offensive lineman. In this scheme, they spend the majority of their time run blocking and only occasionally go out for pass routes. In pass heavy offenses, the opposite may be true. They may line up anywhere on the field in an effort to create mismatches against the defense. If this is the case, they may spend little time actually blocking and are used in different ways throughout the route tree.

The value of blocking tight ends has decreased in recent years as offenses have gone to more of a pass heavy approach. Their ability to block is still important though, especially in the running game. They must be able to block at a solid level to provide extra stress to the defense. Brandon Pettigrew of the Detroit Lions is known as being a blocking specialist. In 2014, he only had 10 receptions for 70 yards, but still played major snaps for a playoff team. Tight ends also sometimes help in pass protection, depending on the play call and scheme, although they are more likely to go out for pass routes.

Tony Gonzalez, who played in the NFL for the Kansas City Chiefs and Atlanta Falcons from 1997 to 2013, is one of the most productive receiving tight ends of all time. Gonzalez was a 14-time Pro Bowl selection and finished his career with 1,325 career receptions for 15,127 yards. He also had 111 career touchdown catches. All 3 statistics are records for NFL tight ends.

Today, Rob Gronkowski of the New England Patriots and Jimmy Graham of the Seattle Seahawks are the premier receiving tight ends in the NFL. Gronkowski is known for his all-around dominance at the tight end position and was voted as the 10th best player in the league by NFL players in 2015. Gronkowski showed the value a dominant tight end could have in 2011, when he had 90 receptions for 1,327 yards and 17 touchdowns. This dominant play has led to a growth in the role of many tight ends.

In 2011, Graham also showed the impact a tight end could have on a football game. In that season he had 99 catches for 1,310 yards and 11 touchdowns. Graham’s value was also shown when he became the highest paid tight end in the NFL when he signed a new contract with the New Orleans Saints in 2014. His free agency drew attention as many debated how he should be compensated because he had such a unique role that often resembled that of a wide receiver.

Tight end is a versatile and unique position that can have a major impact in the running and passing game. This unique combination of skills makes them an important part of almost any offense.