Known for playing major roles Serena van der Woodsen in the TV series Gossip Girl as well as film roles in Green Lantern and The Age of Adaline, Blake Lively has always been in great shape.

The Blake Lively diet plan and workout routine below shows how she has been able to get - and stay - in such great shape for all of her different roles both before and after her pregnancy. 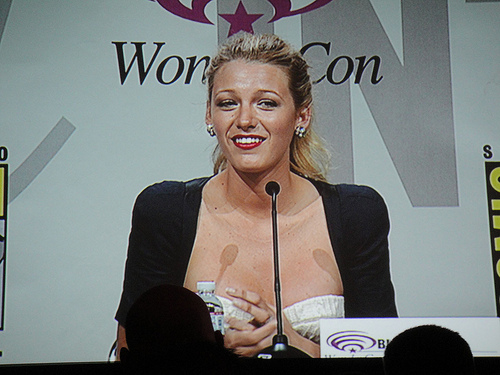 When training for her role as Carol Ferris in the 2011 DC Comics film Green Lantern opposite Ryan Reynolds, Lively focused mostly on circuit training workouts. A sample of one of her circuits was shared in Fitness Magazine.

She would perform all 4 exercises consecutively with no rest between exercises. After finishing the final exercise, she would rest for a short bit. After recovering, she would repeat the entire circuit a total of 3 times per workout.

These circuits allowed Lively to build toned muscle mass, as her character in Green Lantern is very heavy on action ​and actually becomes a superhero herself in some comic books. The setup of the circuits also boosted her metabolism and burned off any extra calories.

After having her first child with husband Reynolds in 2014, Lively's training changed. Lively is now trained by Don Saladino of Drive495. Saladino shared what Lively's training program looks like in an November 2015 interview with People Magazine. She would work out 6 days per week with relatively short workouts that would rarely go over an hour.

This is way beyond having her just look great in a bikini. That's important, but it's about keeping her energy level high and making sure that, day in and day out when she's shooting this film, her recovery is optimal. I told her to listen to her body. When you feel great, get on it. When you don't feel great, shift down a gear. And when you feel like crap, do really minimal work.

These shorter workouts show the importance of training smart, rather that just going to the gym and working aimlessly. Lively's routine works her entire body multiple times in a week and obviously allows her to make great progress.

Lifting weights does have the benefit of building a toned look with lean muscle mass, while simultaneously boosting your metabolism. Cardio training, such as Lively's pool laps are a great way to burn calories. ​

Having the right diet plan is obviously a huge part of Lively's success. She enjoys cooking and would do all of her own grocery shopping and food prep. She focused on quality, nutritious whole foods.

It should be no surprise that the focus of Lively's diet plan ​is lean proteins, vegetables and slower-burning carbs. This is the basis for most balanced diets and provide nutrition for a healthy body as well as fuel for challenging workouts.

We mad sure her meals were well-balanced. She had a protein, a vegetable, and a slow-burning carb. We tried to give her enough so she wasn't stuffed, but she was comfortable. This is not training a fitness competitor or a model. This is about feeding a women who's got a child who's got to have certain nutrients in her body. She's got to take care of herself. She's got to eat healthy. The way that we did it was the right way, and it wasn't through starving her.

The right diet and exercise plan has allowed Lively to stay in great shape despite long hours on set along with the commitment to raising a child and earned her major roles throughout her career, such as in The Sisterhood of the Traveling Pants films, The Town, and Accepted.