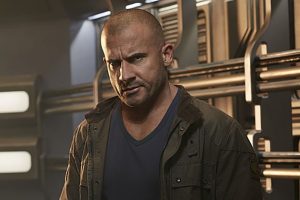 Dominic Purcell has had a long acting career as a tough guy and an enforcer in a variety of television and movie roles.

Preparing for roles like Lincoln Burrows in Prison Break, as well as comic book characters like Drake in the 2004 film Blade: Trinity and as Mick Rory/Heat Wave in the TV series The Flash and DC’s Legends of Tomorrow, comes with expectations of a muscular and menacing look.

Getting a look like that requires a commitment to strength training workouts, a strict diet, as well as fight training to be able to pull of some of his own stunts. Purcell shared a little bit about the challenges that came with playing physically demanding characters, such as the role of Eirick in the 2013 film Vikingdom, in an interview with Bobby Blakely of Examiner.

It was physically very demanding. I was lifting weights, dieting, training, choreographing fight scenes and it was just a nightmare. We would get on set and do a certain choreographed fight sequence and then we would realize we needed about ten more so it all became very improvisational. The stunt guys were amazing, some extraordinary Australian stunt guys and without their help this movie wouldn’t have worked. They were crucial to this movie and went above and beyond the call of duty for this film.

Incorporating plenty of variety is a big part of Parcell’s workout program and diet plan. Depending on which role he is preparing for, he usually includes the following types of exercise daily.

When lifting weights, he focuses on compound movements like squats and deadlifts because those helped to build overall muscle mass. For cardio, he uses plenty of running, jump roping, and other boxing work.

Action roles also come with major demands in terms of learning fight choreography. The video below shows how he trained for the role of Sailor O’Connor in the 2014 film A Fighting Man. Purcell did boxing workouts for months to get ready for the part, as he hadn’t boxed in years. While the goal of these training sessions is to look like a boxer on screen, they are also very challenging workouts.

Purcell did have some previous boxing experience prior to getting the role in A Fighting Man, but hadn’t actually boxed in close to 20 years, as he shared in an interview with Brian Gallagher of MovieWeb. Showing the effort that actors put in to get ready for a role, he trained for 9 months to look the part of a boxer, to improve both his build and his boxing ability.

Dominic Purcell’s tough look and muscular build, to go along with his acting talent, have earned him plenty of big roles over the course of his career as an intimidating presence.