How long does it take to train for a half marathon? 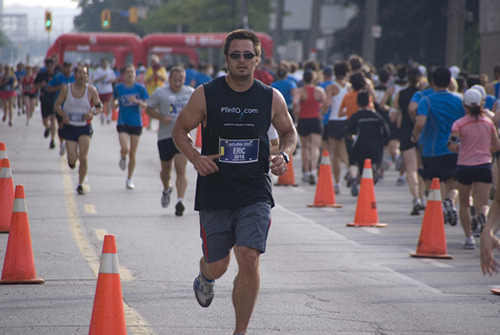 13.1 miles is a daunting distance, but it is far from impossible and can be done sooner than you might think. Figuring out how long to train for a half marathon is an important part of the process. If you train too little, you will struggle to get through it. If you give yourself too much time to train, you may never get around to actually entering a race.

There are obviously differing opinions on how long to train for a half marathon. Even a beginner runner may be able to complete 13.1 miles today if they had to, but the injury risk would be high and so would be the time it takes to recover. Most experts recommended a half marathon specific training program of at least 12-16 weeks to prepare for race day.

Jeff Galloway of Runner’s World says that as long as you are already running consistently, you can be in half marathon shape in about 15 weeks, as long as you train smart and learn to pace yourself.

Every other week, increase your long run by 1.5 miles until you’re run/walking 13 to 14 miles. On alternate weeks, keep your long run to no longer than three miles. Your longest long run should fall two weeks before your half-marathon. Plan to take about 15 weeks to prepare for the big day.

Jay Johnson of Active.com recommends a 12 week training program for first-time marathoners. This isn’t truly for beginners though, as it is suggested that they can already complete 4 or 5 miles at once.

Assuming you’re doing 4 to 5 miles once a week, 12 weeks gives you plenty of time to build up to a 10- or 11-mile long run. You don’t necessarily need to run 13.1 miles in training to be confident that you can finish the 13.1-mile race, yet you don’t want your longest run to be just 8 miles. Getting up to the 10- to 11-mile distance for your weekly long run is the goal.

Thad McLaurin of Active.com prefers to be more conservative when planning a training program. He believes that a 10-16 week program is sufficient, but only if you already have a strong base of distance running each week.

One mistake new runners often make when paring for a half-marathon is thinking that the 12- or 14-week plan takes you from the couch to the finish line. All half-marathon training plans that range in length from 10, 14 or 16 weeks assume that you’ve already built a weekly mileage base of at least 15-20 miles. Your longest run should also be at least 5 miles.

Matt Forsman of Competitor.com believes most beginner runners who are at least casually jogging a couple of times per week can get in shape to run 13.1 miles relatively quickly if they are smart about their training.

If you can manage two to three miles at a time, of either running or a combo of running and walking, a couple times per week, you can get into half-marathon shape in 12 weeks. You’ll want to plan on adding a weekend run of slightly longer length—four to five miles—then gradually increase your mileage to nine to 10 miles over three months.

Christine Luff of About.com says that, although very experienced runners can be half marathon ready in as little as 6 weeks, beginners should take a less aggressive approach to be on the safe side.

If you’ve never done a half marathon before, you should plan to train anywhere from 12 to 14 weeks, depending on your starting point. Taking a safe, gradual approach will avoid running injuries and avoid getting burned out.

It is important to decide on your goals before you enter a race. Do you just want to finish any way possible, running or walking? There is nothing wrong with that. You’ll just want to keep that in mind for your training. Your body is capable of great things if you push yourself in an intelligent way. Hal Elrod, author of The Miracle Morning, was told he would never walk again after a terrible car accident. 9 years later, after only a few weeks of training, he completed a 52 mile ultra-marathon.

Do you have a goal time in mind? That is never a bad idea, but for your first half marathon, maybe just finishing the entire race without having to stop to walk would be a great goal. Once you get through your first race, you’ll have a good idea of how fast you are capable of going and can set new time goals for your next half marathon.

When training, other factors will come in to play. It is best if you know what type of course you will be running on. Is it hilly or flat? Curvy or relatively straight? You’ll want to know what type of course you are going to be on before you race day so you can incorporate that type of training into your program. This is especially if you are going to be on a very hilly course. If that is the case, you’ll want to include plenty of incline and decline training in your program.

Weather is another huge variable in half marathons. A race in the middle of summer will feel much different than running on a fall day. Luckily, most races are competed early in the morning. Still, if you are going to be running for up to 2 hours or more, the temperature can raise significantly, particularly in the summer.

You’ll want to get at least some of your training in at around the same time of day and weather conditions as you expect the race to be. This will help teach you how to pace yourself in the heat as well as how to stay hydrated. If you plan to do a significant part of your training inside on a treadmill, you should still try to get at least 1 or 2 of your sessions to be outside each week. Running in air conditioning has a much different feel than the summer Sun.

Age is another factor. Simply put, the older you are, the longer it takes to recover. That doesn’t mean 13.1 miles is impossible. You just have to take care of your body with proper nutrition and recovery techniques. If you think you are too old, you can look at Harriette Thompson for inspiration. In 2015, at the age of 92 she became the oldest competitor to ever finish a full marathon with a time of 7 hours, 24 minutes, and 36 seconds. If she can do a full marathon in that time, don’t you think you could do a half?

Deciding how long to train for a half marathon is totally up to your best judgement. The sooner you plan to do one, the less prepared you will be. However, if you plan one for too far out you may lose motivation and never actually compete in it. By training smart, learning to pace yourself, and following a half marathon training program of 12-16 weeks, you’ll be race ready faster than you think.