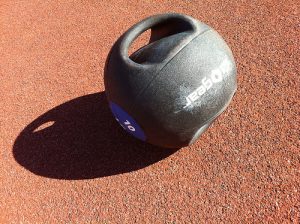 When most people think of med balls, they usually think of plyometric training and various upper body throwing exercises. While they are a great tool for that, there are also many lower body exercises you can also do. Below are 5 of the best examples of variations of medicine ball squats.

When most personal trainers or fitness enthusiasts say medicine ball squats, this is the exercise they are talking about. While goblet squats are traditionally performed with kettlebells, you can also do them with a med ball.

You begin this exercise by standing upright with your feet in your typical squatting width. You tuck the med ball under your chin with your elbows pointed down and slightly out. You then lower yourself into a deep squat position, maintaining good posture, and then raising back up. When you drop, your elbows should go inside of your knees.

You also might be surprised at how little resistance you need for goblet squats. You should pick a weight that will challenge you, but not so heavy that you can’t maintain good posture and form.

Adding thrusters to the end of your squat is a good next step for increasing the level of difficult. You can see what this move looks like in the video below, but essentially when you get to top of your squat you press the ball overhead. Doing this forces you to work you core more and it involves your shoulders.

This is a logical next step after you are comfortable with performing thrusters. When you get to the body of your squat position, you explosively jump up and throw the ball straight up in the air. Obviously, you’ll want to do these outside or somewhere else where you have plenty of available landing space. Also, always be careful when you are throwing things over your head.

The best part of med balls is how easily they can be used for plyometric training. While you don’t throw the ball in this exercise, you are taking advantage of how easy it is to grip as a way to provide resistance.

To perform this movement, you use similar technique to the goblet squat, but when you reach the bottom position, you will explosively jump straight up in the air. This is a very good exercise for athletes who want to work on speed and power.

The squat with toss follows a similar idea to the press throw from above. You’ll just be throwing the ball in a different way. Rather than doing an overhand press above your head, you’ll be doing an underhand toss straight up in the air, while still working the jumping aspect.

Using a med ball for squat training will obviously give you a much different workout than a barbell where you might load up hundreds of pounds on the bar. The exercises above obviously wouldn’t be your first choice if you were training your legs for maximal strength.

While these exercises are much lighter than heavy barbell and dumbbell work, that doesn’t mean they aren’t effective. Basic goblet squats are a great way to teach proper squatting form and can also be helpful on lighter days when you don’t want a heavy load. They are also good for reinforcing technique for experienced lifters.

All of these movements are actually a great way to train the core. Holding a medicine ball in your hands forces and doing movements forces your core to activate and engage. It is responsible for stabilizing your muscles while also transferring power from the legs to the upper body during the plyos.

The jumps and throws may be the best part of med ball training. While the resistance is very light, you are able to focus on developing maximum speed and power. The jumping and throwing movements should be done with maximum explosiveness.

When used properly, medicine balls can be a great tool for training the entire body. While you might have to think outside of the box, you can really challenge your legs with the exercises listed here.