Morning Fasted Cardio: Is it overrated?

For more than a decade, many personal trainers and fitness magazines have claimed the benefits of doing cardio workouts on an empty stomach. Many claim that extra body fat will just melt away by simply manipulating when you eat your breakfast. But is morning fasted cardio all it is cracked up to be? 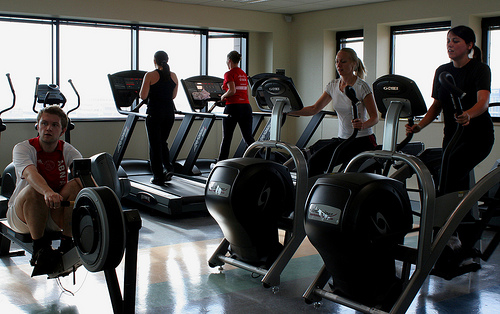 The idea behind morning fasted cardio is that you wake up first thing in the morning on an empty stomach. So then, you go for a jog or hit up an elliptical or bike at your local gym. At this point you haven’t had anything to eat for at least 8 to 12 hours or more, meaning your body should be forced to use your body fat as fuel for your workout, right?

This might not be as groundbreaking as you think. While you may be burn more body fat during a workout if you are fasted, the total number of calories burned will be the same. If you do cardio after breakfast, you’ll burn a higher percentage of calories from the food you just ate. All you are doing is shuffling where the calories are burned from.

Bottom line? Assuming your total calories burned from the workout and total calories consumed from through your diet aren’t changed, it probably doesn’t matter if you do your cardio first thing in the morning on an empty stomach or after you have already eaten a meal. Looking at your total daily energy intake and expenditure is far more important.

More and more studies are backing up the fact morning fasted cardio has no benefits over exercising after a meal, assuming total calories in and calories out stay at baseline levels. A September 2014 study that was published in the Journal of the International Society of Sports Nutrition showed that, with all other variables remaining equal, the timing of your meals does not impact body fat levels.

The study tested 20 young and healthy females who were following a hypocaloric diet, which means they burned more calories than they consumed. The women followed an exercise program that consisted of 1 hour of steady-state aerobic cardio exercise in the morning 3 days per week. 10 of the women did so following an overnight fast, while the other 10 did so after eating breakfast. Both groups demonstrated noticeable fat loss, but neither group had superior results.

Both groups showed a significant loss of weight (P = 0.0005) and fat mass (P = 0.02) from baseline, but no significant between-group differences were noted in any outcome measure. These findings indicate that body composition changes associated with aerobic exercise in conjunction with a hypocaloric diet are similar regardless whether or not an individual is fasted prior to training.

While more research is absolutely needed, it is far too soon to say that morning fasted cardio is a magic solution for anyone looking for a shortcut to burn off unwanted body fat. It’s important to remember the population who participated in this study – young, healthy females. Looking at results for different age groups and fitness levels could be beneficial.

While many people will promote how fasted cardio training sessions might be able to help burn more fat, they fail to point out a major drawback – potentially burning muscle protein for energy. It only makes sense that if your glycogen levels are down, you are left with body fat and muscle protein to burn. Muscle mass has tons of benefits, even if you are only interested in losing weight, and sacrificing it is not a good idea.

If you are an athlete, tinkering with food intake may be too risky for some to try. Few athletes would argue that fasting is good for sports performance, but could it have some adaptation benefits when used in training? It’s certainly possible, but the risk of muscle loss is not to be taken lightly. Frankly, there just isn’t enough research out there to show whether doing fasted workouts in the morning is beneficial in the short and long-term.

Doing morning fasted cardio is an interesting idea and there may be some positives to it, but for most people, it isn’t a silver bullet for fixing all of your fat loss problems. Just getting in a workout at all and eating good, nutritious foods in the right amount each day is what leads to long-term success. The habits of a good exercise program and diet plan are much more important that specific timing details.

You know your body better than anyone and know what will help you feel and perform at your best. If you prefer to exercise on an empty stomach, feel free to do so. But if you prefer to have a light snack or a meal prior to working out, you absolutely shouldn’t feel guilty as long as it fits in with your total caloric goals for the day.