You don't become known as "The Greatest" by accident.

Muhammad Ali has been an inspiration to several generations of fans because of his incredible talent, confidence, and a tremendous work ethic. ​

His workout routine and diet plan show how he trained to become known as the greatest boxer, and one of the greatest athletes, of all time.​ 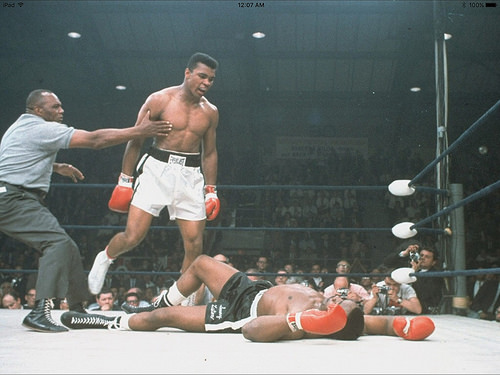 Ali and his trainer were not fans of lifting weights, as they believed having too much muscle would be restricting for a boxer. Despite this, Ali weighed in at a lean and muscular 6'3" and around 213 pounds during his prime.

Ali was able to achieve such a great physique in part because of his sheer volume of training. He enjoyed running and would often run 6 miles to his gym before each workout, do his training, and then run back after. ​

Ali's training consisted of plenty of boxing specific work to go along with his running and jump rope work. He would do plenty of heavy bag work, shadow boxing, speedball work, and plenty of exercises to strength his core. A typical boxing workout of his would consist of:

Men's Fitness talked with Angelo ﻿﻿﻿Dundee, Ali's trainer, before Dundee passed away in 2012. Dundee talked about Ali's impressive work ethic and the type of workouts he enjoyed doing when at his peak.

He was the first guy in the gym, and the last to leave. My belief is that a fighter's muscles can't bulk up. There can't be any restrictions to their punches. I ain't got nothing against weights. A lot of guys use weights, and they do well with them, but he didn't. He loved to run. A lot of times, he couldn't get a ride from Miami to 5th Street Gym, so he would run from his apartment and then run back. I'd say it's about seven miles. He was just a very special human being.

Most people wouldn't even be able to make it to their gym if they had to run 6 miles to get there. The fact that Ali could do so, then go through an intense and long boxing training session, and then run back shows how committed he was to being the best boxer.

His diet was a huge part of Ali's success and allowed him to build and maintain muscle despite long hours in the gym and plenty of conditioning work. His diet was filled with high quality nutrition and would be very effective even today. The main foods he ate consisted of:

Ali would get his lean protein from sources like chicken and steak. The rest of his diet consisted of fruits, vegetables, and smart carbohydrates to fuel his training. He focused on drinking plenty of water to go with natural fruit juices.

Muhammad Ali, then known as Cassius Clay, first began his training for boxing at the age of 12. He first one the world heavyweight championship at the age of 22. His outspoken and confident personality quickly won him fans, as he was always full of great quotes.

At the age of 18, he won the light heavyweight division of the 1960 Rome Olympic Games. He retired in 1981 and had an overall boxing record of 56 wins and 5 losses, with 37 wins by knockout.

Ali passed away on June 3, 2016 at the age of 74 after being treated for respiratory complications. ​He will be remembered by many as the greatest boxer, if not the greatest athlete, of all time.