Paul Rudd has long been known as one of the best comedic actors around, but never as much of an action star.

That all changed when he was cast by Marvel Studios in the role of Scott Lang/Ant-Man for the 2015 hit Ant-Man and the 2016 film Captain America: Civil War. ​

The Paul Rudd Ant-Man workout routine and diet below show how he was able to get into the best shape of his life to bring the tiny superhero to the big screen. Rudd mostly used strength training circuits to build lean muscle and shred off body fat. ​ 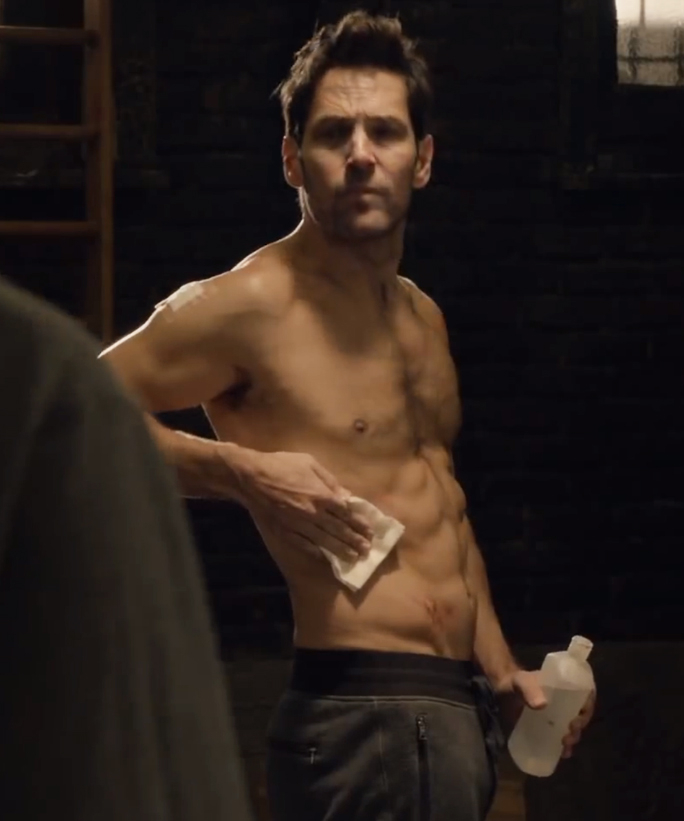 Rudd trained and was strict with his diet for more than a year to get in shape to play Ant-Man, according to his trainer, fitness consultant Richard Louis of Fitspace NYC. His workout consisted of a combination of cardio and strength training to achieve a lean and muscular look.

The big reason for Rudd's success was that he focused on a good exercise and diet plan for more than a year and was consistent in his training. ​This allowed him to achieve the desired lean and toned look of Marvel's tiniest Avenger, despite a busy schedule.

Below are a couple samples of Rudd's lifting circuits that he would do, from an article on Muscle & Fitness. ​These workouts, along with a clean diet, helped him to gain muscle mass on his chest, legs, and arms while reducing his waist size and dropping his body fat percentage.

The circuits below are meant to be performed 6 times, with a rest period of only 1 minute between circuits. There is no rest between exercises and Rudd would pick the heaviest weight he could use and still complete all of the listed reps. ​

These circuits are great for putting on lean muscle mass while also burning tons of calories. If you are going to try these circuits, begin with a conservative weight that you know you can complete the reps with.

It's a good idea to time each circuit, and your rest period. This way, you have a goal time to shoot for and to know if you are making progress the next time you complete the workout. You can also increase the resistance weight on each exercise if you really want to challenge yourself.

Rudd talked about what it was like to make exercise a priority for the first time in his career in an article with People Magazine. While he has never really been in bad shape, he took his commitment to the next level to get the lean look he wanted for the role.

I'd never exercised harder than this for an extended amount of time. My day was centered around fitness and health, and that was kind of a first. Every other time, I had to go about my day and try to find the time to work out. But [this time] everything else about my day kind of had to fit in around the workouts. I was going to be held accountable for it, and there was a reason for doing it. I wasn't just randomly doing this kind of arbitrarily, which would have made it a lot harder.

Rudd was able to have success because of his dedication to the training program. He even says if he didn't have such a focused program, he wouldn't have gotten the results that he wanted. He got in such great shape by making his workouts and diet a priority and not just trying to fit it in as best he could.

Exercise is obviously crucial, but you also need the right diet to match it. Rudd joked with Variety that "I basically didn't eat anything for about a year. I took the Chris Pratt approach to training for an action movie. Eliminate anything fun for a year and then you can play a hero."

While Rudd's diet certainly wasn't that restrictive, he did stop drinking alcohol and went on a low carb diet for a year to go along with his training program. This obviously worked as he was able to get in the best shape of his life and have lean, visible abs for the film.

Paul RuddOn how his diet changed to match his training

I didn't drink any alcohol [and] I had no carbs. I'm still doing all the workouts, I'm still eating pretty well.

Rudd focused on a pretty strict diet to get so lean. While he didn't eliminate carbs completely, he kept his intake pretty low for the most part and focused on getting in plenty of quality protein to help fuel his training sessions and busy schedule.

If you are a hero in a Marvel comics film, you probably didn't sign up for just 1 film, as is the case with Rudd. He has to stay in pretty good shape all year long because he's probably not that far from showing up as Scott Lang again, including the Ant-Man and the Wasp sequel due in 2018.

Rudd has had major roles in some very popular television shows, such as Friends and Parks and Recreation, and films, such as Anchorman: The Legend of Ron Burgandy, Role Models, and I Love You, Man.

While Rudd has long been one of the funniest actors in Hollywood, he was never much of an action star. The Paul Rudd Ant-Man workout routine and diet plan show just how committed he was to the role to get in the best shape of his career.