The Ben Affleck workout for The Town

Ben Affleck has been in great shape throughout his acting career, but began to take his fitness to another level beginning with the 2010 film The Town.

Years before bulking up to play Batman, ​Affleck got in what was then the best shape of his career to portray Doug MacRay. Affleck was able to get - and stay - in such great shape despite starring in and directing the film.

The Ben Affleck workout routine and diet plan for The Town below show ​hard he is willing to work to bring his characters to the big screen. 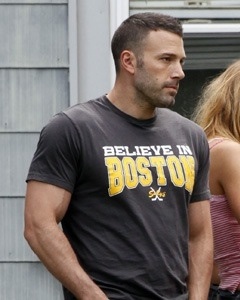 Ben Affleck as Doug MacRay in The Town - Photo By: Warner Bros. Entertainment

Affleck is personally trained by Walter Norton Jr. of the Institute of Performance & Fitness. Each workout would begin with a thorough warm up, which would include things like dynamic stretching, foam rolling, and muscle activation exercises. He would have 3 different types of exercise days:

Each workout session would include some upper body, lower body, and core movements. The training included a lot of volume, which helped him to put on muscle mass without adding any body fat. In addition to core work and other exercises, his chest and leg workout day would look like this:

These workout session were different from a typical bodybuilding style of split, where only 1 or 2 major muscle groups are worked on a given day. These workouts included full body work for each weight lifting session.

These long and intense training sessions played off for Affleck, as he was very muscular in the film. The strength training sessions allowed him to not only put on muscle mass, but also boost his metabolism and drop any extra body fat. They also gave him functional strength, which came in handy as his character has a lot of action in the film.

To get as lean and muscular as he was in The Town, Affleck followed a very clean and strict diet. The diet was high in protein, with moderate amounts of carbs and relatively low fat. Lean protein, vegetables, and smart carbohydrate choices were a big key to his success.

The sports nutritionist who worked with him on the film, Rehan Jalali, demonstrated what a typical day would look like in an article with Bodybuilding.com:

Affleck was consuming 12-14 calories per day per pound of body weight. The calories broke down to 35 percent from protein, 45 percent from carbohydrates, and 20 percent from fat. This is a pretty commonly recommended ratio for a lean bodybuilding diet.

Affleck was trying to build a lean and muscular physique for the film to be an intimidating presence on screen. ​You can see Jalali talking in the video below about Affleck's nutrition plan. You can also part of Affleck's character's workout routine from the film in the video.

Affleck has always been in great shape, but he seems to continue to add muscle mass and get leaner as he ages. His impressive diet plans and workout routines for The Town and Batman v Superman: Dawn of Justice show just how committed he is to the characters he plays.