Captain America has become one of Marvel Comics' most popular characters thanks in no small part to the portrayal by Chris Evans.

Evans has earned fans across the globe playing the heroic alter ego of Steve Rogers in several films since his debut in Captain America: The First Avenger. ​You can see what his workout and diet routine to get in superhero shape are like below. 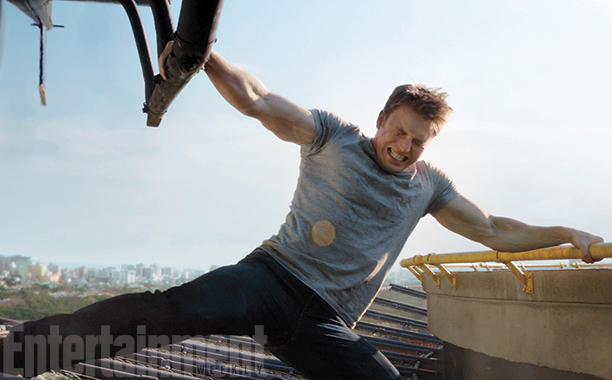 Evans' personal trainer, Simon Waterson, shared one of his workouts in an interview with Coach Magazin﻿﻿e. Waterson is known for also training Daniel Craig for his role of James Bond and Jake Gyllenhaal for Prince of Persia. The following leg workout was designed to add size and strength to his quads, glutes, hamstrings, and calves.

Each exercise is down with 3 sets of 6 to 8 reps. If you are going to try this workout, you should choose a weight that is challenging but doable. If you can do more than 8 reps, it is time to increase the resistance. If you struggle to get to 6, you might want to drop the weight.

Waterson designed this workout for Evans specifically because he had focused on the upper body muscles like chest, biceps, and triceps. While big arms are pretty much a prerequisite for a superhero, a balanced physique is even more impressive.

In addition to this workout, he would do other lower body work, including plyometrics and bodyweight movements. These type of exercises also give him some functional training which allows him to perform some of his own stunts.

Evans shared what his plan was like to bulk back up for The Winter Soldier in an interview with Train Magazine. He and his trainer focused on lot on the big compound lifts, which are usually the most effective type of lifts.

The preparation for Captain America was really about me bulking up looks wise, so it was a lot of weight training so I could get big. The training regimen was based on heavyweight/low-rep sets of the classic compound lifts. I did stuff like squats, deadlifts, shoulder press, incline bench presses, weighted dips and chin-ups.

Bench press, squats, and deadlifts are crucial exercises for putting on size and strength all over the body. While it is obviously important that Evans was able to look the part, it helped to have functional muscle so that he could look and move like a soldier who was injected with a super serum.

When you are as big and as ripped as Evans' has been in the Avengers films, you have to have a pretty clean diet. While he doesn't follow a specific diet, he does have a very clean meal plan that allows him to build plenty of muscle before filming begins without putting on any bad weight.

It shouldn't be surprising that plenty of lean protein, smart carbohydrates, healthy fats, and vegetables make up the vast majority of Evans' diet. A typical day of eating when preparing for the role of Captain Rogers looks like the following:

A big part of the success of this nutrition program is the attention to detail in meals surrounding the training session. He would have a snack before and right after his workout, and then a full meal 20 minutes later. This is crucial for feeding the muscles, getting the most out of the workout, and recovering faster.

This might look like a lot of food to some people, but it is necessary for someone like Evans, who packs a lot of muscle mass on his 6'0" tall frame. A diet like this helps to not only fuel his workouts and muscle growth, but also his long hours on set playing a very physical character.

When not playing a superhero, Evans drops a little weight to be ready for more "normal" acting parts. He has gotten his exercise and diet plan to a steady routine and has been able to quickly get back in shape between Captain America: The First Avenger, The Avengers, Captain America: Winter Soldier, Avengers: Age of Ultron, and Captain America: Civil War.

I had lost weight in between filming The Avengers and this, so it was really about bulking up as clean as possible, so I had a high protein diet nutrition to play Captain America. The equation is around 2 grams per kilogram of bodyweight and that's achieved with a bunch of chicken, but then I'd also consume other sources of lean protein and some protein shakes through the day. But the eating is the thing I like the least (laughs), because I'd feel full all the time.

While many people would love to have an excuse to eat every couple of hours, Evans found that that was one of the bigger struggles to getting ready. His body was used to being at a lighter weight, so he found it difficult to force down enough protein and total calories to get bigger.

Evans has had the unique opportunity of playing multiple comic book characters, and his physique and ability to look like an action star has helped him get those roles. In addition to his role in Marvel Studio Films, he has played Johnny Storm/the Human in Torch in the Fantastic Four movies and Lucas Lee in Scott Pilgrim vs. The World.