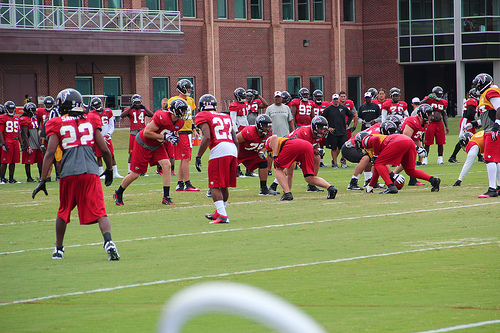 What Does the Vertical Jump Test Measure?

Whether you are an athlete or sports fan, you have probably heard of the vertical jump. It is a combine drill at scouting combines, such as the ones put on by the NFL and NBA. So, exactly what does the vertical jump test measure?

The vertical jump test measures how high the individual can jump straight up in the air. That’s it. You jump and get a number, usually it is measured in inches in the United States and in centimeters elsewhere. There are different kinds of vertical jump tests. In the standing test, the athlete isn’t allowed to take any steps. Usually, they do a quick squat down followed by the jump. There is also a running vertical jump test. This could have a predetermined number of steps, such as 1 to 3. The athlete gets to run that number of steps before jumping. The standing test is the one that is most common for testing purposes, and is used at the NBA and NFL combines.

Tests, such as the vertical jump, aren’t something that can always be directly applied to sports. The raw number doesn’t really matter, but what that number can “translate” to is more important.

What the vertical jump test measures in practical terms, is explosive power output. In general, the higher an athlete can jump, the more explosive that athlete is. It isn’t always that simple and there are a lot of factors that go into a jumping performance and how it helps power. Technique, bodyweight, and sports skill all have an impact on how it helps an athlete at their sport.

For instance, if an athlete improves their jumping technique, without improving strength and power, they can improve their test score. This doesn’t mean they are a better athlete and may not help them with their sport at all. Likewise, if an athlete loses weight and can jump higher, it doesn’t necessarily help sport performance. They may be lighter, but could have lost muscle, which could decrease their strength. This is a situation where, even though the athlete can jump higher, there is a negative impact on their actual sport performance.

You can see there are many variables, which make this a difficult ability to master. This skill is obviously very important for speed and power based sports, even if there isn’t significant jumping involved. It isn’t particularly valuable in endurance based sports.

You can see a video demonstration of a vertical jump test being administered below. Justin Anderson of Virginia is the athlete in the video. He is having his vertical measured at the NBA Draft scouting combine. Anderson was a first round pick, at 21st overall, by the Dallas Mavericks in the 2015 NBA Draft.

Actual jumping height is more important based on the specific sport and specific position played. For instance, being able to jump high probably wouldn’t help a quarterback in football at all, but for a wide receiver it can be crucial on several plays per game. You can also direct instances in sports like volleyball and basketball where the person who can jump highest clearly has the advantage.

In simplest terms, the vertical jump test measures how high and athlete can jump vertically in the air. More important is what the number means. The higher an individual can jump, generally the more power and explosive ability they have, which is what is really important for sport.

What is the Average Vertical Jump?

The Highest Vertical Jump Ever

5 Summer Runs You May Want to Compete In