Defensive ends are one of the most important positions on a football team and they are absolutely crucial for shutting down the offense. The defensive end drills below cover both pass rushing and run stopping.

​A good defensive end will be able to anchor in the run game against offensive lineman and keep containment. They also need to be able to rush the quarterback with a variety of moves to put pressure in the pocket. 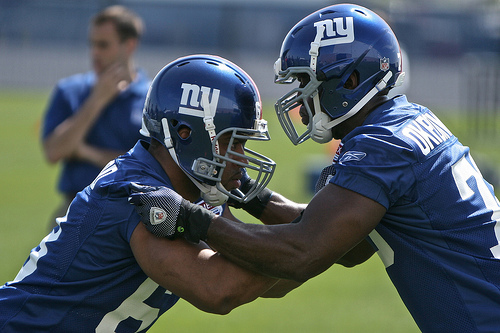 The most glamorous part of playing defensive end is being able to take the quarterback down. Speed is a tremendous asset when rushing the passer, but to be successful, you'll need a variety of moves to get around or through the offensive tackle.

Defensive ends need to get to the quarterback while being sure that they aren't allowing a run play to develop behind them. A good stance, explosive step at the snap, and a powerful punch are crucial to success rushing the passer.

​There are a variety of pass rush moves that can be used for defensive end drills. For most of them, you can have either someone stand in for an offensive lineman to block on the play, or have someone holding a bag to be in place of the blocker.

​Any pass rush drill can be done in this kind of fashion. The format of the drills is very efficient and allows athletes to get a bunch of reps in a short period of time. This is good, because there are so many rushing moves. A good defensive end will have plenty of moves and counter-moves to go to during the course of a football game.

The towel drill is great for working on a pure speed rush. This really works on having an explosive first step that is quick at the snap, allowing the defender to go straight around the blocker. This is a very simple drill as seen in the video below.

A blocker and defender line up, with a towel placed next to the heel of the blocker. The defender lines up on the outside shoulder, across from the towel.

​At the snap, the blocker attempts to reach out in front of the defender, as in pass protection. The defensive end tries to win the first step at the snap, while staying low enough to the ground to get around the blocker and grab the towel of off the grass.

The bull rush is the favorite move of power rushers. The video below demonstrates how to perform a bull rush drill. A bull rush is very important to get good at, because other moves can be performed off of it.

The most important part of a bull rush is performing a hard first step at the offensive lineman. The goal is to quickly make contact with the blocker, lock the arms out, and drive him back into the quarterback.

The video below also talks about the importance of attacking "half a man". A lineman's strongest punch is straight out in front, as in the locked out position in the bench press. If the offensive lineman can get into this position, he will be very tough to get around.

Even if an end can get by an offensive tackle quickly, there still may be a running back in the way of getting to the quarterback. This is where the Gauntlet drill comes in, because it requires getting past multiple blockers.

In the video below, there are 3 blockers, lined up about 5 yards behind each other, with a dummy behind the last blocker. At the snap, the defensive lineman works to get past the blockers, one at a time. They can use any pass rushing technique they want. Preferably, they will mix it up.

​To turn this drill into a fun competition, you can time this drill. Run a stopwatch from the time the ball is snapped - or whistle is blown - until the defender makes contact with the dummy in the back. Timing it will make it competitive not just for the defender, but for the blockers also.

While a defensive end who can get after the quarterback can potentially change the game on any play, they need to be able to hold up in the running game also or the offense will have no trouble running the football right by them.

​Each run stopping drill requires a proper stance, a powerful first step, and an explosive punch to the chest of the blocker. It is also important to maintain gap responsibility and not get too deep past the line of scrimmage on run plays.

An end also must keep outside containment when the scheme calls for it and not let anyone get around him for a free path to the sideline. Below are 3 defensive end drills for run stopping.

The first step and punch is the most important part of defensive line play. The stance and shock drill covers both aspects. The goal is to have an explosive first step and sharp punch on the pad to simulate the first step of a play.

This stresses quick reactions and good fundamentals. It is important to maintain a low stance, explode forward with both feet, and give a powerful punch to the pad, which is where the chest would be on the blocker. ​

To stand in for the blocker, 1 player could be holding a dummy or a goal post with padding around it can do the trick, as seen in the video below. The goal post works great because you can have 2 lines on each side, which makes it very efficient.

Disruptive defensive lineman can get double teamed on both run and pass plays. A double team is a sign of respect from the offense and it provides a great opportunity to occupy 2 blockers. While taking up space is great, breaking through the blocks is even better.

The video below demonstrates a double team splitting drills, with 2 athletes holding dummies. The goal of the drill is to remain low and try to fight between the 2 offensive lineman. Try to push one of the defenders off to the side to slide through.

It is important not to get too deep, or you will create a hole for the running back behind you. ​Most schemes will want the player to stay within 2 yards or so of the line of scrimmage on running plays.

In run defense, it is important to read where the offensive lineman is trying to block you, as that can give you the key to where the football is going.

In the video below, the athlete is line up between an offensive tackle and a tight end. The goal is to read-and-react to whoever is blocking you. If the blocker comes straight at you, you punch out so he can't get his hands on you and look for the direction of the play. If the blocker tries to cut you off, the defender should fight to get in front. ​You must maintain your gap responsibilities.

Pass rushing and run stopping are very important for defensive lineman, but depending on scheme, they may need other skills. The most common example would be basic zone pass coverage skills if the defense runs a zone blitz.

This is rare, but if your defensive system requires it, it must be addressed. Another example is a versatile defender who is big enough to move inside to defensive tackle as a 3-technique on passing downs. Both run and pass plays are a little bit different when you are in the middle.

​These are by no means the only defensive end drills out there, but they do hit all of the important fundamentals at the position. They will provide a great base in your training and improve production.