Proper tackling technique is one of the most important skills a beginner football player can learn for the sport. With more research detailing the impact of head trauma on long-term health technique is now more crucial than ever.

Learning to tackle properly begins with using drills to reinforce proper form for young athletes. Below you will find a handful of the best youth football tackling drills than focus on developing good, fundamental form tackles.  ​ 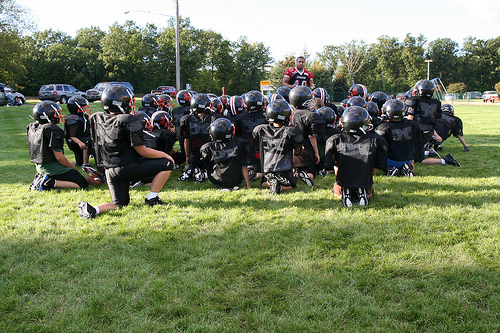 You don't want to have beginners trying to make tackles at full speed when they don't know what they are doing. That's a risky way to do things because, not only is the ball carrier likely to get away, they open themselves up to learning bad habits that could potentially lead to injury.

One of the best ways to introduce beginners to tackling is by doing form tackling drills. Form tackling drills teaches the athlete to properly wrap up the ball carrier and learn the proper form to bring them down. These can be down very slowly, using a dummy instead of a live running back.

The video below demonstrates a simple form tackling drill, which can be done against air or a dummy held by another player. This allows you to line up several lines of players at once and get in a lot of reps. This is great for early season, non-padded practices.

You can see at the beginning that they focus on proper footwork and wrap up technique, even if it is done against air. As they get more advanced, they can use a dummy to stand in for an offensive player, which gives them something to wrap up and punch at slightly faster speeds. The person holding the dummy can also move so the defender is used to a moving target. ​

The video below is a little longer, but it really focuses on the importance of using heads up technique in football and why coaches need to emphasize proper form as a way to prevent injuries in young athletes.

The drill focuses on technique from everything from the beginning stance to finally bringing the offensive player to the ground. Going into the tackle, it is important for the player to have their head up, their body in an athletic position, and their hands ready to punch. This is a great early season drill and can be done without pads. ​

This video shows a progression of teaching good tackling form to beginners. It progresses from focusing on upper body form while kneeling all the way to moving at close to full speeds and wrapping up a dummy.

There is a whole host of drills in the video. They can be done either together on the same day or broken up into smaller chunks over the course of a week. It includes work on footwork, upper body technique, and even reading and reacting to the offense.

Running backs and wide receivers aren't going to just ran straight to a tackler. This drill introduces the concept of staying in front of the ball carrier, reacting to their movements and getting into position to make the stop.

This can be done with as few as 2 people at a time. It is meant for non-padded work and the players aren't supposed to be taken to the ground. The offensive player can cut, run, and move in any direction and the defender has to be able to stick with them and wrap them up. ​

Shed and Wrap Up Drill

This is another drill for youth football players that more closely mimics the speed and action they will actually feel during a game. This requires 1 ball carrier, 1 lead blocker, and 1 defender. The drill works on shedding a blocker and finding the football.

This drill doesn't actually work on the technique of tackling and bringing someone to the ground, but it is one of the most important parts of tackling. After all, if you don't get to the ball carrier, you aren't going to bring them down.

This drill is done with all 11 defenders set up, and a runner in the backfield on offense. ​At the snap of the ball, the running back runs either left or right and receives a toss from the quarterback on a sweep play. The goal of the defender is to pursue the football at the proper angle to meet the running back at the sideline.

Read and Wrap Up Drill

This is a more advanced, padded drill. It allows the defender to shuffle and read when the ball carrier makes a cut, so they can be in good position to make a tackle. For this, you need several dummy pads lying on the ground.

The offensive player slowly jogs down in a straight line and are allowed to cut up in any of the holes created by the bags. The defender shuffles in front of the offensive player, and when the cut is made, the defender explodes towards the ball ​and wraps them up without bringing them to the ground.

This is definitely a more advanced drill and it works on one on one tackling at the goal line. You can see what it looks like in the video below. The drill uses 1 offensive player, 1 defensive player, and a dummy.

Tackling is a crucial fundamental skill for football defenders. Learning to do it properly, to both prevent big plays and injuries, must be learned as soon as players are introduced to the sport.