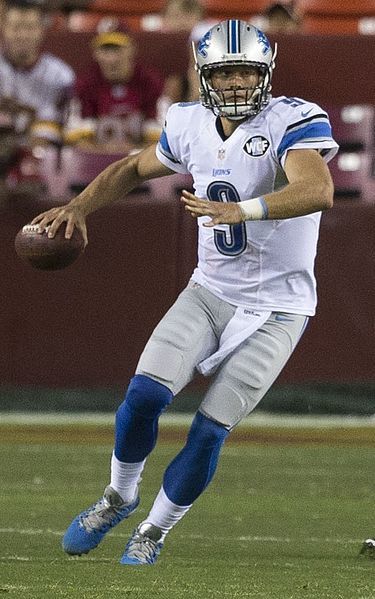 Stafford has started 128 straight games as quarterback for the Detroit Lions. Photo: Wikimedia

Matthew Stafford is known for being one of the toughest quarterbacks in the NFL. He proved that in his rookie season in 2009 against the Cleveland Browns when, while being mic’d up for NFL Films, he threw a game-winning touchdown with a just-separated non-throwing shoulder.

But Stafford struggled with injuries in his first two seasons, only starting 13 of a possible 32 games. Stafford’s commitment to health and performance with both his workout and diet has allowed him to turn into one of the most reliable quarterbacks around, with a string of 120+ straight starts.

Key among Stafford’s workout is developing not just the big muscles, but the smaller muscle groups as well. This is important for preventing injuries by getting rid of weak spots. Below are a couple of the main exercises Stafford does.

It goes without saying that upper body and arm strength is important for a professional quarterback.

With the dumbbell single-arm overhead swing takeaways, Stafford will perform 4 sets of 20 reps (per arm) in a workout, according to Men’s Journal. Stafford uses unstable dumbbells with a thick grip to insert variation and unpredictability in the exercise.

Training with exercises like dumbbell single-arm overhead swing takeaways can be very functional for athletes. It is a multi-purpose exercise that targets the shoulders, core, grip, and more.

Lower body and core muscles are just as important for quarterbacks as building upper body/arm strength. One exercise that Stafford uses to build strength in these areas is the banded loop single-leg squat thrust. A common workout will have Stafford perform 4 sets of 20 repetitions with the exercise.

This exercise, as shown in the video above, can be used to develop strength and balance in the lower body. Mixing up between single and double-leg exercises is important in a sport like football, which is heavy on unpredictable movements.

Special diet plans have been all the rage in the news with NFL quarterbacks in recent years. Even though bizarre and strict diets can sometimes work, sticking to fundamentals can many times be just as effective.

While Stafford may not be on a fancy fad diet, his eating habits are a key part of his career longevity. In recent seasons, Stafford has sported a leaner and more athletic physique.

It appears Stafford’s nutrition plan is based on sticking to the fundamentals, according to A Healthier Michigan. While Stafford may like his cheeseburgers, he knows how important it is to stick to fruits and vegetables, get plenty of sleep and prioritize recovery, even when it isn’t easy.

Very few things are more important to professional athletes than their body. While eating right can improve physical appearance, proper nutrition can build and maintain muscle as well as help recovery.

Whispers that the “injury-prone” label was being applied to Matthew Stafford after a rough start to his career. Stafford’s commitment to strength and conditioning, as well as proper nutrition, is a testament to how hard work can change one’s career fortune.