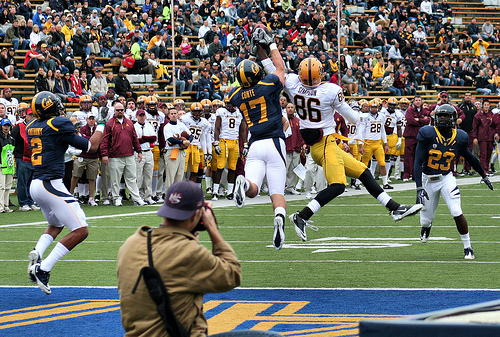 The free safety position often has some of the best all-around athletes on the football field. They are capable of making plays from sideline to sideline in both run and pass defense.

The free safety has to prevent big plays from the offense while also being in position to make big of their own on defense. So what is a free safety and what do they do? Free safeties have four main roles on defense.

Many free safeties are also relied upon to provide coverage on the kickoff and punt coverage aspect of special teams.

Some schemes use free and strong safeties in interchangeable roles. In this case, there isn’t a big difference between the positions, each athlete is just responsible for each side of the field. The explanation below assumes the team uses separate free and strong positions, with each having a different role.

Free safeties can sometimes be used as an extra cornerback in man coverage. They may match up against a slot receiver or a running back who is split out wide. Sometimes, they may also have to cover or help with a wide receiver. They are usually up to the task, although they may struggle with shiftier players as they usually don’t have the agility of a cornerback.

Zone coverage is where a free safety can really make a big impact. As they usually have good speed, they can cover a large area of the football field and help shut down their part of the zone. Often, they will be in a one deep situation. This means the cover the deep part of the field, don’t let anything behind them, and come up to support after the pass is thrown. In a two deep scheme, they will cover a deep half of the field, while the strong safety takes the other half.

While they don’t have as physical of a role in the running game as strong safeties, run support is very important. As they usually are lined up in a deep part of the field, they have to find the ball carrier, pursue at the right angle, and make a solid tackle. For the majority of the game, they are lined up deep, which means they are the last line of defense. If a free safety is making too many tackles in the running game, that likely means that the defenders in front of them are losing their individual battle. The safety should be exactly that, a safety net that you hopefully won’t need but is there if they have to prevent a big play.

The ability to break on the ball when a quarterback passes it is very important for a free safety. As they usually are required to keep everything in front of them, they can read the quarterback’s eyes and find the football. This can lead to big defensive plays, such as interceptions, deflections or tips to other teammates, or knocked down passes. If nothing else, the athlete should be able to make a quality hit on the receiver, which can lead to a dropped pass or a quick tackle after the reception is made.

Ed Reed is one of the greatest free safeties of all-time. Reed played in the NFL from 2002 to 2013, mostly as a member of the Baltimore Ravens. He was known for his ability to diagnose plays and for making tremendous plays on the ball. His elite ball skills led to 64 career regular interceptions. This was the 6th most all-time at the time of his retirement after the 2013 season. Reed was also selected to 9 Pro Bowls and was the 2004 NFL Defensive Player of the Year. His play was crucial in the Ravens winning Super Bowl XLVII. Some of Reed’s career highlights can be seen in the video below.

Eric Berry of the Kansas City Chiefs is one of the best free safeties in the NFL today. Berry is a unique all-around talent at the position who is great in pass coverage and run support. He has been a 3-time Pro Bowl selection since beginning his career in 2010. You can see some highlights from Berry’s career below.

The free safety position consists of some of the best all-around athletes on the football field who are complete players on defense.