What is the Strong Safety Position in American Football?

The strong safety position is one of the last lines of defense on an American football field. They are crucial in the middle of the defense against running and passing plays.

In many schemes, strong safeties play a hybrid defensive back/linebacker role. The right combination of size, speed, and hitting ability over the middle can make them intimidating to an entire offense. 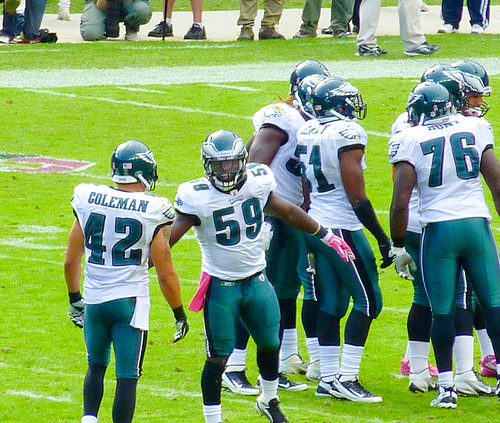 Today, the free and strong safety positions are often interchangeable in many defensive schemes. As many teams are more pass-heavy than ever, all defensive backs need good coverage skills in addition to the ability to stop the run.

Together with the free safety, they are the last line of defense on most plays. However, in obvious running situations, the strong safety will often line up closer to the line of scrimmage, where the ball is. In this situation, they are basically an extra linebacker providing more run support. This makes them the 8th man “in the box”, which makes it more challenging for offensive lines to block all assignments on run.

John Lynch was one of the best known run-stoppers all-time at the position. Lynch played in the NFL from 1993-2007 with the Tampa Bay Buccaneers and the Denver Broncos. While Lynch never had great interception numbers, he is known as one of the best safeties of all-time largely because of  his ability in the run game. He had 3 seasons with at least 100 tackles. You can see a video with some of Lynch’s highlights below.

While most traditional strong safeties don’t have great man-to-man coverage skills, they are still vitally important in pass coverage. They may have to cover a wide variety of offensive weapons, which can be challenging. As strong safeties are usually the biggest defensive back, they can struggle with quick slot receivers or running backs. Because of this the main matchup is usually the tight end. As tight ends are the biggest offensive receiving threats, this makes for a better matchup. In this situation, they’ll typically line up close to the line of scrimmage to jam the tight end at the line, while still being in position if it is a running play.

Today, Kam Chancellor of the Seattle Seahawks is someone that offenses have to account for on every play. This is because Chancellor has a reputation of providing big hits on receivers coming in his zone. These hits can knock the ball loose and lead to an incomplete pass or interception. This is very valuable to a defense. If an offense is scared to target the middle of the field, you can essentially take away a large chunk of their offensive plays. You can see highlights of Chancellor in the video below.

Pass rushing is a rare, but important skill. While most of their responsibilities in the passing games are in coverage, the occasionally will blitz in an effort to confuse the offense and get to the quarterback. This can be particularly challenging for offenses to block because they may line up anywhere on the field.

With their size, speed, and open-field tackling ability, strong safeties are often stalwarts in kickoff and punt coverage. They often make for the best coverage players for shutting down the opponent’s return game.