Safeties are the last line of defense on the football field. They have to be dependable while defending both the run and the pass and play-making ability is a desired bonus.

​​Regardless of the defensive system, both positions need to be able to produce against the run and the pass. Coverage ability, ball skills, run stopping technique, and tackling ability are a must, as they have responsibilities all over the football field. 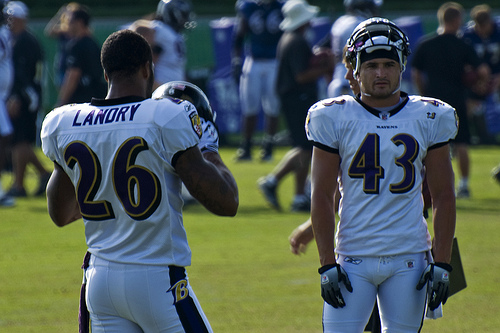 Coverage skills are obviously important for defensive backs. Both free safeties and strong safeties need to be skilled in man-to-man and zone defense.

​When used in man-to-man coverage, free safeties may have to matchup with slot receivers and running backs. Likewise, strong safeties may need to defend tight ends and running backs. Based on the variety of offensive weapons they have to defend, proper technique is essential. Just consider the difference between covering a shifty slot receiver compared to a big, strong tight end.

Good pass defense starts with a proper backpedal. The video below demonstrates a drill for working on the backpedal. You can see that there is a focus on staying low and on balance. This is big because it allows you to read and react quickly without wasting any motion.

The video below demonstrates how to perform off man coverage on a wide receiver, as shown by former NFL cornerback Nnamdi Asomugha. The drill is done as a 1-on-1 matchup.

In man coverage, safeties need to keep a proper cushion between themselves and the offensive player. In other words, whenever a receiver gets to close to a backpedaling defensive back, the DB needs to open up his hips and start running, as they won't be fast enough while backpedaling to develop proper cushion. Former NFL safety Steve Gregory demonstrates the cushion drill in the video below.

Many safeties prefer zone coverage, as they are only responsible for an area as opposed to actual offensive player. It's important not to let a receiver get behind, and only break on the ball when you know you can make the play.

Here is a zone reaction drill. It starts with a backpedal and focus​es on reading the defense while controlling your zone. There is a quarterback and two receivers, so the athlete needs to be prepared for the ball to go either way. In this example, the safety could be covering the middle of the field, such as in a cover 3 defense.

While many coaches will joke that they are defensive backs and not receivers because they can't catch the ball, a safety with ball skills can be a game-changer. Free safeties in particular are essentially center fielders who have the chance to make plays on the ball from sideline to sideline.

The video below demonstrates Alabama defensive backs doing an interception drill. In this, they must react to the quarterback's throw and attempt to make a play on the ball by knocking it away, or ideally, picking it off.​

While it is important for defensive backs to stop the run, they are often called upon to make tackles in the run game. Strong safeties often come up in the box and play as an extra linebacker in running situations.

The video below shows a drill that can be especially useful for strong safeties in run support. The defender has to read the hole that the running back is going through and quickly react and make the tackle. ​

The pursuit drill might be the most common run stopping drill used by coaches, and it can be done with all 11 defenders. In this drill, each defender must read the offensive player and pursue them at the proper angle to make the tackle.

As the last line of defense, sure tackling is an absolute must for all safeties. Sometimes, they are the only thing stopping the offense from a chunk play, first down, or touchdown. Again, safeties are forced to corral and bring down a variety of offensive weapons, which makes proper technique important.

The video below gives a slow-motion demonstration of the technique needed to make a proper tackle.​

The video below shows a form tackling drill where proper technique is emphasized. The defender wraps up the pad's "body" and drives their feet to simulate driving the offensive player to the ground.