How to be a Complete Middle/Inside Linebacker 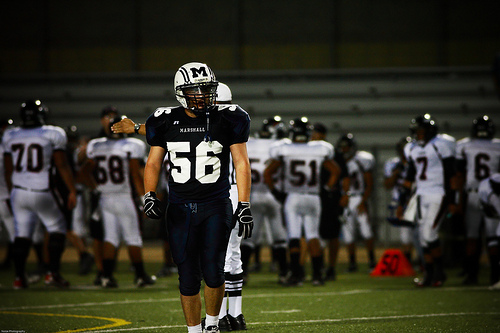 Inside/middle linebackers are responsible for controlling the middle of the field for the defense. Many also have responsibilities for play-calling and making sure the defense is in the right set.

If you want to know how to be a middle linebacker at a high level, you’ll have to take an all-around approach. Complete middle linebackers shut down the run from sideline-to-sideline and cover a big range in middle of the field in the passing game. Having these skills makes a 3-down linebacker who the offense has to account for on every play.

Middle linebackers have a variety of builds. Their desired build is based on scheme. If they are primarily run-pluggers in the middle of the field, a thicker build is desired to hold up. A smaller build can make sense if they have more responsibilities in pass coverage.

At the NFL level, there have been a large range of backers manning the inside. They come in all shapes and sizes. For instance, former Miami Dolphin Zach Thomas was 5’11” and 242 pounds. Former Chicago Bear Brian Urlacher was an athletic 6’4″ and 258 pounds. There have been much more extreme versions of this, but between 240 and 260 pounds is most common.

Inside linebackers are often among the strongest football players, pound-for-pound, on the field. They have to be strong enough to hold up in the middle of the field and not get engulfed by offensive lineman. Strength is especially important in run defense.

If a linebacker wants to stop the run across the field, they’ll have to have pretty good speed. Speed is also crucial in pass coverage. Middle linebackers are rarely matched up with speedy targets in the game, but they sometimes have to cover the deep middle of the field. This requires good long speed to cover the zone and prevent big plays down the seam.

Reading play keys is crucial. These “reads” are examining the offenses early movements to be able to tell what their play is going to be. If the athlete is bad a making reads, they can look really bad and give up big plays. Good reads can lead to big plays for the defense. Usually an offensive lineman is the read. In general, it helps to see if they are setting up in pass protection or moving towards a run blocking target. Depending on situations, they key could be another offensive position.

Along with the defensive line, middle linebackers are responsible for stopping runs on the inside. That’s not all they need to do in the running game, though. They have to be able to go from sideline-to-sideline.

A good run-stopper will be able to read his key, flow to the football, shed blocks, and make a quality tackle. All of these skills are important, because without one of them it can still allow a big play. Run stopping requires dependability.

The play call and scheme is important when it comes to pass coverage responsibilities. Inside linebackers may have to do both man-to-man and zone coverage. In man-to-man coverage, they rarely have to match-up with wide receivers or running backs but do sometimes. Tight ends are more common. In zone coverage, they obviously would be responsible for their zone, which is usually in the middle of the field.

Some NFL inside linebackers are only 2-down run stuffers. If this is the case, they come off the field in obvious passing situations and are replaced by a nickel defensive back. This can be done on an extreme level against a pass-heavy team or in 2-minute drill situations. Not having great pass coverage abilities will cost linebackers snaps.

This is not one of the most important skills for middle linebackers, but it can be important, depending on scheme. Outside linebackers generally have more responsibilities as a pass rusher, but an occasional blitz through the A gap can cause fits for an offense.

Middle backers are often looked at to be the vocal leaders. A lot of times, this includes play calling duties. They get the call from a coach on the sideline and have to relay the message to the defense. They are responsible for making sure the defensive line, other linebackers, and secondary are lined up properly and running the right defense. In hurry up situations, they may have extra responsibilities, such as calling the plays themselves and making sure the defense is set and the right substitution packages are on the field.

Linebackers are core special teams players because they can be used in such crucial ways. Their running and open-field tackling abilities often make them the best choices for punt and kickoff coverage. Sure tackling is absolutely crucial in these aspects of the game.

Middle linebackers are a crucial and irreplaceable defender on the inside of the defense who can control the run and pass games. Learning how to be a middle linebacker means learning all of these skills.