Being an offensive lineman is often a thankless job, but good blockers are crucial for the offense to reach its potential. The offensive line drills below work on skills for both the run and pass blocking to created balanced football players.

Controlling what big and athletic defensive lineman and linebackers do is no easy task. ​Offensive tackles, guards, and centers need to be able to both get movement on a nose tackle and stay in front of a speed rushing end or backer. 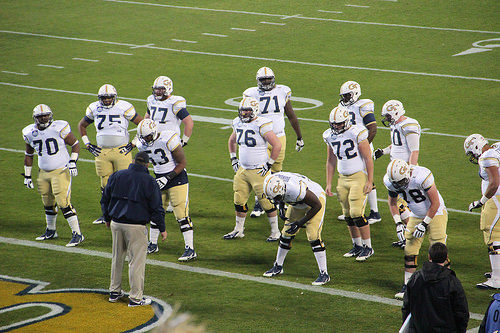 While some people only notice the blockers when something goes bad, every successful run or pass begins with quality blocking up front. A good offensive lineman can handle his individual assignment and work with his line mates to control the defensive front.

Good line play requires a few different things. It starts with a quality stance that doesn't tip off the defense to the play call. The first step is also crucial for lineman as they want to fire off the snap and make first contact with the defender on running plays.

Whether it is a run or pass, footwork and hand punch are important. Taking proper angles to the defender, or mirroring in pass protection, requires athleticism and intelligence. ​Lineman must be aware of their target player or target zone in the case of zone blocking schemes and some pass protection sets.

While some people still see the o-line as big, strong brawlers, there is much more to them than that. Athleticism, technique, and football intelligence are also important ​because of the variety of shapes and sizes of defenders that need to be blocked.

Most offensive lineman love run blocking, because it allows them to be physical and aggressive while dictating movements on the defense. While pass protection is more passive in nature, run blocking puts the line into attack mode as they look to seek and destroy their assignment.

Good run blocking starts with proper footwork and angles. Intelligence is also crucial for the o-line, because they must be able to recognize defensive schemes and pick out there assignment. Communication and chemistry with the other lineman can clear up any confusion about assignments.

It is important for the lineman to stay low and have a quality hand punch to get a hold of their target and lock on until the back has room to run by. Below are some of the best offensive line drills for run blocking. ​

The first couple of steps off of the line of scrimmage are the most important for an offensive lineman. An explosion of the ball, followed by quick, powerful, and accurate steps are the first part of a successful run block.

The drill can be done with many athletes lined up on a fictional line of scrimmage. ​It is important to work on the first steps going in every direction. They should practice for when the defender is lined head up or an a shade to the left or right.

After a good stance and proper footwork, a solid punch with the upper body is the next step. the goal of this punch drill is to work on make first contact with the blocking assignment and getting hands on them as quickly as possible with proper technique.

This drill is the logical next step after blockers are comfortable with the jab pop shown above. ​The punch comes immediately after the first two steps. The goal is to jab pop and then punch at the defender immediately.

This drill can be done with as few as 2 players. There needs to be 1 blocker and 1 defender. To make it a non-contact drill, the defender can be using a dummy pad held out in front to be the target of the punch from the blocker. ​

On some interior running plays, it is very important that one particular defensive tackle gets cleared out of the way to make a hole for the running back. Other times, a dominant defender is just too much for any 1 blocker. In either scenario, a double team could be necessary.

A good double team requires good chemistry between the 2 blockers to execute it properly. The blockers must line up tight, so the defender can't slip through, and​ still be able to get to the outside shoulder of the defender so he can't get around them.

The blockers should use good technique to drive the defender down the football field. What happens next depends on the play call. Some plays require both blockers to stick to the defender, while others allow one of the blockers to leave once their is movement to find another defender to block. ​

Technique is crucial whenever an offensive lineman is pulling. While this is most commonly done with guards, tackles and centers may also be asked to pull sometimes, depending on the offensive system.

The goal of the drill is to have sharp footwork that doesn't waste any motion. The blocker should open up quickly and move right down the line to the hole they are pulling to. This is great for improving pulling footwork and technique. ​

While pass blocking is a more passive play for the offensive lineman, it is just as important. Poor technique will lead to pressure on the quarterback, which could quickly lead to a sack or turnover. Bad form on just 1 play can change the momentum of the game.

While most pass protection pressure is placed on offensive tackles to contain the elite pass rushing defensive ends and outside linebackers, it is just as important for interior lineman. The fastest route to the quarterback is a straight line, so guards and centers must be able to prevent interior pressure.

Even though pass blocking is less aggressive, it still is important to explode at the snap and get into position. Speed rushers won't wait and they are looking to jump the snap for every advantage, so the offense must have good positioning and be ready to punch, slide, and mirror. Below are some of the best offensive line drills for pass blocking.  ​

After an explosive move off the snap, the next most important part of pass protection is having a strong and accurate punch with the hands. The hand accuracy drill, seen in the video below, addresses that and can be done in large groups or with as little as 2 players.

This drill is all about explosive and accurate punches. ​Each blocker has a defender line up across from them, holding a small pad. The video shows them using a boxing pad, but you can use any small target or dummy that you have already.

As soon as the ball is snapped, the o-lineman snap into a pass protection stance. From there they focus on a small target on the pad to punch. It is important to use a solid punching technique and to have fast hands​. The defender remains still so the blocker can focus solely on hand work.

This is a great non-contact drill for working on the kick sliding and mirroring a pass rusher. The setup of the drill is smart in that it allows big groups of lineman to get plenty of reps practicing kick slide footwork at the same time.

The o-line has to be aware when in pass protection of different stunts and blitz schemes that the defense can do. To be able to counter this, the lineman must be aware and able to kick slide to stay in front of defenders coming from all angles.

The focus of this drill is maintaining good pass protection posture and having a solid and quick kick slide. When the line drops into the protection, a coach will point to signify where a pass rusher is coming from. The line the kick slides in that direction as if they were mirroring the blitzer.

As some passing plays are slower to develop, it is important for the offensive lineman to be able to hold their blocks for several seconds. The continuous set drill address this by working on punching and resetting in pass protection sets.

This drill can be done with 1 blocker and several defenders. Ideally, you will have 3 or 4 players with a blocking pad to fill in as blitzers. They will attack the offensive lineman, who sets up in pass protection.

Whenever a defender comes, the blocker makes first contact by making a solid punch on the pad and driving the defender by the play. The blocker then resets and prepares for more blockers to come and then repeats the process. ​

Most of the time at the snap, you won't be able to tell which defenders are coming right away and most lineman will have to pay attention to an area where there might be multiple defenders. The punch, punch, run drill addresses this challenging aspect.

In this drill, the lineman blocks down as if there is an inside rusher. He must stay aware though, because in this scenario the lineman inside him handles the inside rusher, and the blocker kick slides to the outside rusher to try to stay in front of him and mirror.

Sometimes, an outside defender will get the upper hand on the blocker. That doesn't mean the play is over, though. If this happens, the blocker should work to drive past the quarterback and not allow them to take a straight line to the passer. ​

Playing offensive tackle, guard, or center can be a thankless job to the public, but smart coaches and teammates recognize their impact on the game. A great line can make an offense productive on their own and dictate the game to the defense.

Different schemes ask for different things out of their players, but ​the best offensive lines are able to control the line of scrimmage and give backs plenty of room in the running game and the quarterback plenty of time to see the pocket.