The Complete Guide to Outside Linebacker Drills

Outside linebackers are usually among the most versatile of defenders on a football field. They have major responsibilities defending the run and the pass. Below are outside linebacker drills for run stopping, pass coverage, pass rushing, and tackling.

The responsibilities of an outside linebacker can vary greatly based on defensive scheme and skills of the individual player. For instance, in a 3-4 defense, they are usually bigger and take on more of a pass rushing role, similar to a defensive end.

In a 4-3, though, both weakside and strongside backers are usually a little smaller and play more zone and man coverage in pass defense. A 5 man front may require a mix of skills. In any defense, run stopping and solid, fundamental tackling are very important. 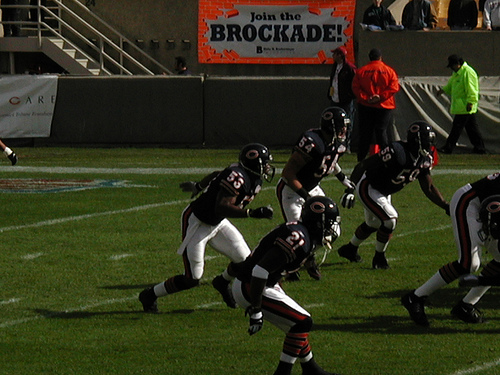 Stopping the run is crucial for any linebacker. Good run defense starts with good fundamentals. An outside linebacker is given keys to focus on, and it is important that they read them correctly and are in the right position.

Proper pursuit is also important. Using the right technique to shuffle and then sprint when the back makes a cut helps to limit the running game. The pursuit angle is crucial here, which is why that is such a popular drill.

Gap control and block shedding are also important. If given a gap responsibility, the linebacker has to plug that gap so the running back can't get through it. This will most likely require some kind of block shedding to get around or through the offensive lineman, tight end, or lead fullback who is blocking on the play.  ​

​The shuffle, read, run drill is designed for the linebacker to use solid fundamentals in the running game. The backer finds the ball, shuffles towards line of scrimmage where the ball is headed, and then sprints towards the ballcarrier when he takes off.

It is very important to remain in a good position and to shuffle, with no crossing over of the feet. Notice in the video below how the athlete is always in a good stance, with his eyes on the ball. He doesn't get his feet tangled up and is able to chase the back down the line of scrimmage.  ​

The linebacker always stays one step behind the running back, so he has the proper angle to make a tackle if the back cuts up the football field. When doing this, it is important to not let the back get any further ahead then necessary. ​

The shed and scrape drill is similar to the shuffle, read, run, but it adds the element of block shedding. In this drill, a dummy is used in place of a blocker. The linebacker must shuffle, towards the ball, shed the block, and then go in for a tackle.

The pursuit drill is one of the most common defense drills around. The video below shows a basic linebacker pursuit drill for running plays that are inside of the tackle box.

In this scenario, all 3 linebackers are reading the running back to see where he is headed. They shuffle towards the ball, and once it is handed off, they move in for the tackle. ​

The video below has the same idea as the inside pursuit, but it for outside running plays. It also demonstrations having all 11 defenders on the field to pursue the back. There are 2 running backs in the backfield, and the quarterback has the option to pitch it to either side.

Finding the football and pursuing at a good angle is the most important concept to be taken from this drill. All 11 defenders are supposed to meet the ballcarrier on the sideline, and not allow them to break free. Obviously, no actual tackling is done in this drill so it can be useful for all 11 defenders. This is also a great drill for conditioning.

While backers will rarely have to line up man-to-man with an elite wide receiver, they may have to cover tight ends, fullbacks, and running backs over the course of a football game. They could also have to cover any position in zone coverage.

Because they may have to match up with both big and fast weapons, proper fundamentals in pass coverage are crucial. While speed is great, the proper technique is what will allow linebackers to matchup. ​It is important to use both man and zone outside linebacker drills to work on coverage skills.

The video below demonstrates a simple man coverage drill. The outside linebacker is lined up 5 yards away from the line of scrimmage and is matched up man-to-man with the tight end. The backer is in a good stance, backpedals a couple yards, and the sticks on the tight end's hip when he makes a cut.

The video below demonstrates how tricky zone coverage can be for outside linebackers and why proper technique is so important. The linebacker is covering the deep middle of the football field in this drill, which just happens to be where the slot receiver is.

​This drill shows just a few of the important aspects that go into zone coverage. The backer must read the receiver, run with him step-for-step and make sure nobody else is coming into his zone.

Most defensive schemes will require outside linebackers to be able to rush the passer at least some of the time. In a 3-4 defense, it is usually their primary role in pass defense. Proper technique includes a quick first step, an explosive punch to engage the blocker, and a good mix of speed and power moves to get to the quarterback.

The blitz progression drill is great for teaching the fundamentals of blitzing. It begins with getting around the blocker with zero contact, and then advances to making contact and getting skinny through the hole. As athletes get more advanced, they can rip or swim around the blocker.

This drill can be used to work both inside and outside rushes. In the inside drill, it is important to attack one of the outside hips of the blocking dummy, push him away, and then get skinny through the hole on the way to the passer. ​

In the outside rush version, the backer will use speed and only make contact with the offensive lineman if necessary. The rip or swim move can be effective in this scenario. ​

The drill below specifically works block shedding. In the drill, a coach stands in for an offensive lineman. There is also a dummy that takes the place of a running back in pass protection. A second dummy is located back in what would be the middle of the pocket to represent the quarterback.

​The defender can use any move to get around the initial blocker and then, with enough momentum, gets around the first dummy with a speed move before reaching the passer. You can see a demo in the video below.

Tackling may be the most important skill for any outside linebacker. A fundamentally sound tackle will bring the ballcarrier down and end the play. If the backer is in the proper position to make the tackle, most of the work is already done.

The gap tackling drill below combines both pursuit and form tackling. The linebacker pursues the back down the line of scrimmage until the back chooses a hole. Once that happens, the backer attacks and wraps up with good form.

Run stopping, pass coverage, pass rushing, and tackling are all crucial skills for an all-around backer. Using a variety of outside linebacker drills will help prepare them for the different roles they will need to fill on a football field.