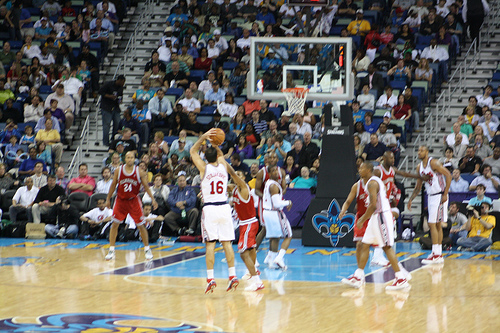 The NBA, WNBA, and FIBA are unique in that they have different distances based on where on the court the are. The distances are farthest around the arc, with a shortened line in the corners of the court. With basketball courts only being 50 feet wide at this level, it would be very impractical to have the line be any further than 22 feet, which is used by the NBA, in the corners.

The WNBA and FIBA use the same length, even though the WNBA court is slightly larger. The WNBA uses the same size court as the NBA, while FIBA has a unique court size that is slightly smaller.

Youth, elementary, or any other organized basketball leagues not listed above are based on their individual governing body. It used to be common for youth leagues to not even have a 3 point line. This can happen when a high school court drops down their side baskets to make 2 courts going perpendicular to the main basketball court.

This is very common in youth basketball tournaments, but it is good to check with your governing body. Failing that, most elementary basketball leagues may just use a junior high school basketball court, which would put the distance at 19.75 feet.

The fact that a shot from beyond the arc is worth 3 points instead of 2 has made many coaches at all levels more interested in using the 3 point line as a weapon, because of its potential efficiency. You can have a worse shooting perentage from this distance, and it might still be a more efficient shot.

This difference becomes much more pronounced when comparing long 2 point jump shots to 3 pointers. For instance, at the high school level, there might only be a 2 or 3% difference for good shooters on a 19 foot jumper as opposed to a 20 footer, which is beyond the arc. For this reason, as shooters continue to increase their percentages from distance, knowing the exact 3 point line distance in basketball is crucial.