The NBA Draft Combine takes place every may as an opportunity for prospects to show their stuff to front office personnel through a series of tests. But what exactly are all the NBA Draft Combine drills and what are all of their records and best results over the years? 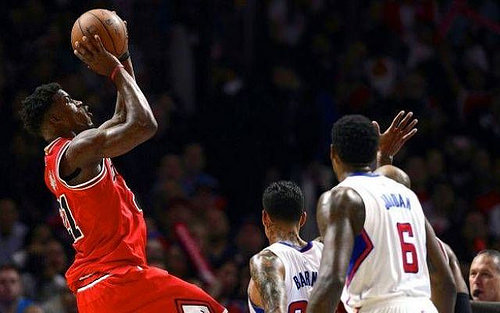 There are 3 other tests that are also conducted, which test physical makeup and shooting ability of the prospects. They consist of:

The NBA has historical records of every draft combine since the 2001 class on their website.

The max bench press test consists of athletes bench pressing 185 for the maximum number of reps while maintaining proper form.

Keep, a 6'11" center, went undrafted in 2003 out of San Diego and went on to play in the Philippine Basketball Association.

The standing vertical tests vertical jump height without a running start. The athlete may only squat down and can't take any steps prior to jumping.

Young, a 6'7" guard/forward out of USC, was the 16th selection in the 1st Round of the 2007 Draft by the Washington Wizards. He would go on to also play for the Clippers, 76ers, and Lakers. ​

The three quarter sprint drill times the athlete's speed by timing how long it takes them to travel 3/4 of the way down the court.

Belcher, a 6'4" guard out of Nebraska, was not selected in the draft. He would go on to play professionally in Italy. ​

The shuttle run measures speed and change of direction ability. It was not added as an event at the combine until the 2013-2014 class.

Brewer, a 6'4" point guard who attended Auburn, was selected in the second round, with the 40th overall selection, by in the Indiana Pacers in the 2001 Draft. ​He played for 4 seasons in the NBA before playing overseas.

The anthropometric stats take a look at the physical build and makeup of the prospects. They are tested for things such as:

It's important to note that each year, many of the top prospects don't participate in some or all of the drills, meaning these results aren't necessarily indicative of the entire prospect pool from the time.

These results and records show the obvious point that athleticism alone can't predict performance on the basketball court. Of the players with the records at their drill, only 1 - Nick Young - became a 1st round draft pick and went on to have a productive career.

Brewer, who spent 4 seasons in the league, was the only other player to last for significant time in the league and of the 6 tests, only 2 record holders were drafted at all. Although, everyone listed did go on to play professional basketball somewhere.

The accuracy of some of these results should also be questioned somewhat. The three quarter sprint, shuttle run, and lane agility drill have relied on a stopwatch to get their results in the past. When dealing with times that are 10 seconds or less, human error can play a huge factor.

That certainly doesn't mean that this combine drills are useless, though. ​While these are hardly perfect tests, they do give a quantitative look at how each athlete's strength, speed, agility, and jumping ability compares to the others in the class.