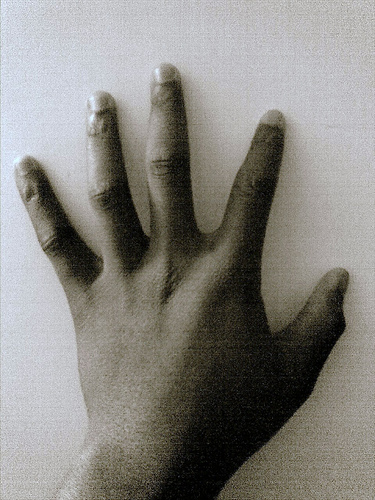 The NBA has measured the length and width of rookie prospect hands since the 2010 combine. Who has the biggest hands in the NBA?

Based on combine data, the Orlando Magic’s Andrew Nicholson has the biggest hands in the NBA by length at 10 inches, and Greg Smith of the Minnesota Timberwolves has the widest hands of active players at 12″.

Biggest hands in the NBA by length – Since 2010 Draft Combine

How hand length is measured at the Draft Combine, according to the NBA: “Length of the prospect’s hands in inches. The measurement is taken from the bottom of the player’s palm to the tip of his middle finger.” The NBA began measuring hand length at the 2010 Combine, and here are the longest results for each draft class since then:

Biggest hands in the NBA by width – Since 2010 Draft Combine

How hand width is measured at the Draft Combine, according to the NBA: “Width of the prospect’s hand in inches. The measurement is taken from the player’s outstretched hand from the tip of the thumb to tip of the pinky finger.” The NBA first began measuring hand length of athletes at the 2010 Combine. The widest results for each rookie class since then are:

All data is compiled from: http://stats.nba.com/draftcombine/#!/anthro/

The longest hands since measurements were taken was by Dexter Pittman, who was a second round pick, at 32nd overall, by the Miami Heat in 2010. After his career at Texas, he would go on to play 3 seasons for the Heat. Smith has the widest hands since measurements were taken at 1 foot wide. He went undrafted in 2011 out of Fresno State and spent time in the D-League before being signed by the Houston Rockets.

This data doesn’t take into account active players who didn’t attend or weren’t measured at the NBA Draft Combine. So anyone who sat out the combine or wasn’t invited wouldn’t be listed, even if they are currently in the league. That means that Boban Marjanovic’s massive hands aren’t listed, because there isn’t an official measurement for them.

Hand measurement is a quirky measurement to be taken at both NFL and NBA combines. It is one of the smaller and easiest parts of the NBA Combine Drills process.

While it doesn’t have an impact for the vast majority of prospects, scouts and front office personnel want to know if the prospects have any potential physical limitations. If an athlete has hands that are to small to grip or handle a basketball, that could actually hurt their performance on the court in some ways.

There are some impressive basketball players on the list above, including Kawhi Leonard and Rudy Gobert. Both players are stars at their position, partly due to their freakish combination of size and athleticism. It’s reasonable to think that their massive hands play some small part in their success.