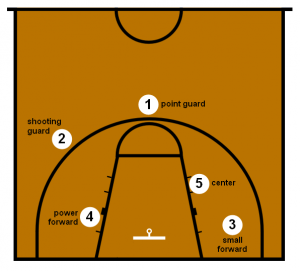 Offensive player positions on a basketball court – Photo By: Wikimedia

The diagram above shows the player positions on offense. Traditional starting spots are with the point guard at the top of the key, the shooting guard and small forward on the wings, and the power forward on center in the post area. However, any position can be anywhere on the court at a given point during a play.

Basketball positions can mean vastly different things between teams and different players. Most coaches try to take advantage of individual’s talents rather than trying to shoehorn them into a traditional mold. The lines between positions can be blurred, and most players are capable of playing multiple spots, but the general roles are:

A point guard is generally considered the leader of a basketball team on the floor. Offensively, they are usually responsible for bringing the ball up the court and getting the team into a play or offensive set. They help to direct traffic on both ends of the court and are responsible for helping to get their teammates the ball in position to score.

One of the wings on the court. They are usually the best long range shooter on the team and capable of scoring from a variety of spots. They may also have some ballhandling responsibilities if they are a capable dribbler.

The other wing position on offense. Their skill set can often be similar to that of a shooting guard depending on the system. They need to be able to shoot from distance to provide spacing as well as create shots for themselves and others.

This is usually a post player who is also capable of shooting from mid-range. They need to be able to rebound, set quality screens, and score in the low post. Today, more power forwards are capable of spreading the floor with their 3-point shooting.

This is usually the biggest player on the basketball court and they need to be capable scorers in the low post and good rebounders offensively. Defensively, they are responsible for protecting the paint and preventing easy looks at the basket.

Basketball positions today don’t mean nearly as much as they used to, especially in the NBA. Players like LeBron James and Draymond Green have skills of both perimeter and post players and are capable of playing several different positions offensively and defensively. As players become more versatile, positions will mean less and less. If you have a center with a great jump shot, or a point guard who can post up smaller players, teams should take advantage of that.

The basketball player numbers are designed to help simplify the positions, especially for coaches. It is simply easier for writing and communicating with athletes on the basketball court and in the locker room. In general, it can rank a players size from smallest to largest, but there are infinite exceptions and that rarely matters. Players don’t often match up with their prototype.

Different offensive and defensive systems can ask much different things from their players. Today, coaches look to take advantage of each of their players skills and look for the best combination of matchups. They simply want to get their best lineup of 5 players on the court, regardless of what traditional basketball positions are.