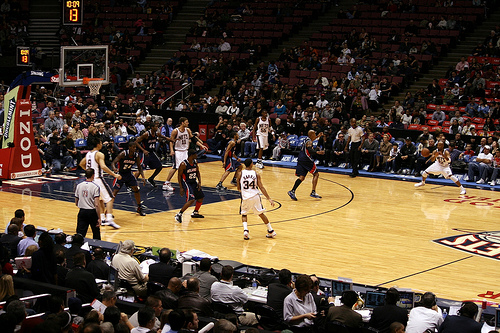 Keys to a Basketball Strength and Conditioning Program

A well-designed basketball strength and conditioning program can be the difference between having skilled, but over-matched players and a team that can dominate from the opening tip on. A position and system specific approach is important for any program, because the physical demands are different based on what the athlete is being asked to do.

Each position has a different way to prioritize their training. Obviously, perimeter players don’t generally need as much bulk and strength as post players who are fighting against other big men in the paint. Pure speed would be more important than strength for most point guards and wings. A good program will incorporate all aspects, but in the order of their positional value.

The offensive and defensive systems also have to be taken into account. Some offenses use the traditional setup of having two post players, but more offenses are moving towards having one post player and having power forwards who have more shooting and perimeter ability.

Basketball players definitely need a base level of muscle mass and this is an important starting point, especially for beginners. Having well-balanced muscle can make athletes stronger and hold up better to the more physical parts of the game that can lead to injury. Too much muscle, though, can slow the athlete down and hinder the other abilities below. It is important to find the right balance.

A base level of strength is needed for basically everything on the basketball court. We think of basketball strength as being able to hold up in the post, driving to the lane, or grabbing rebounds, but even shooting and ballhandling can be aided with good strength. In general, the more time spent in the post, the more beneficial strength can be.

Power and explosive ability is crucial on the basketball court. These can be any short bursts where the more explosive athlete always wins. Defense, rebounding, and cutting to the hoop are great examples of this. There is an obvious impact to being able to move quickly and jump really high in basketball.

Speed is a massively valuable ability for basketball players. Speed helps on both ends of the court. Think of how difficult it is to defend someone like John Wall in the open court. While speed is more important for, say a point guard than a center, speed still impacts each position. A fast big man can cause trouble on both ends in fast-break situations.

Long distance running isn’t necessarily the best form of conditioning for a basketball player. How many times do you see a player going the same exact speed for miles at a time? The conditioning needs to replicate what is done on the basketball court. This means short bursts of explosive movements, mixed with a brief recovery. Actually playing basketball is an obvious way to accomplish this, but there are basketball training drills that can be done to work on specific skills while also improving conditioning.

A basketball strength and conditioning program has to, shockingly, prepare athletes to play basketball. It sounds so simple, but mistakes are made here frequently. High-level athletes can’t simply focus on bodybuilding training with some long-distance running. They need to be prepared for the rigors of sprinting up and down the court, playing defense, and crashing the boards. A really fit athlete will no basketball-specific training would look terribly unfit on a basketball court.