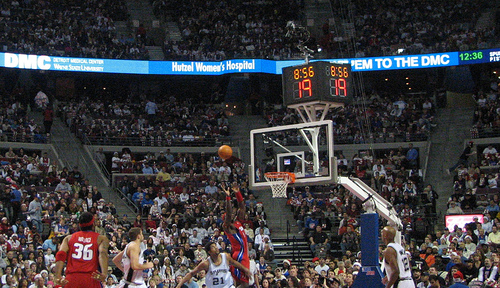 Despite being undersized and not being a flashy scorer on the basketball court, Ben Wallace was a dominant player in the NBA for a long stretch of time. If you are looking for motivation from the hard-working and dominant rebounder and defender, you can find some of the best Ben Wallace quotes below.

Wow. This quote exemplifies the work ethic and determination that Wallace had. As an undersized and undrafted player, he was counted out by many people before ever playing in the league. Wallace earned everything he got through hard work and showing his value whenever he stepped on the court. He became so valuable that teams couldn’t afford to take him off the court.

He didn’t just settle when he started to receive playing time. When he started seeing success, he didn’t quit working. He still worked to improve his game and take it to an even higher level.

This quote shows the importance of learning from mistakes. Do you notice how he doesn’t say completely avoid mistakes? Mistakes are going to happen to anyone who is trying to push themselves to improve. The important thing is to learn from those mistakes and not repeat them.

Wallace always put the team first. He wasn’t interested in putting up stats or getting a lot of touches on offense if he didn’t deserve them. He did the little things that make a basketball team great, whether they show up on the stat sheet or not.

This is a reminder that nothing is given, even if success looks guaranteed. Wallace showed though his play that he didn’t take anything for granted. He didn’t count success before achieving it.

I used to play with the weights, but once I hit my sophomore year, I got serious. That’s when I got addicted. You know, you start seeing a couple of rips and you like how it looks and you keep working, and it goes from there, Now I am addicted. I enjoy working out. I enjoy being in the weight room.

Ben Wallace was a classic underdog who would go on to have one of the best careers ever for an undrafted player after he wasn’t selected in the 1996 NBA Draft coming out of Cuyahoga Community College and Virginia Union.

Despite being listed as an undersized 6’9″ center, he would go from little-used backup to invaluable star after breaking out with the Detroit Pistons. He was always a fan favorite with the Pistons and his hair style inspired the phrase “fear the fro”, while his style of play helped define the “going to work” Pistons era.

Wallace’s defense and rebounding are what made him stand out despite a lack of offensive stats. Most impressively, he was a four-time NBA Defensive Player of the Year. He was also a 2004 NBA Champion with the Detroit Pistons and a 4-time All-Star.

Wallace would spend time with the Washington Bullets, Orlando Magic, Detroit Pistons, Chicago Bulls, and Cleveland Cavaliers throughout his 16 seasons. In 1,088 career regular season games, he would amass impressive totals of 10,482 total rebounds and 2,137 blocks.

Wallace would leave a lasting legacy after retiring from the NBA. Players like Draymond Green have openly shared how he inspired them. This shows how impressive Wallace was because normally young players aspire to be like basketball’s leading scorers and shooters. These Ben Wallace quotes show how his determination and work ethic would lead to a great career and help to motivate and inspire future generations.