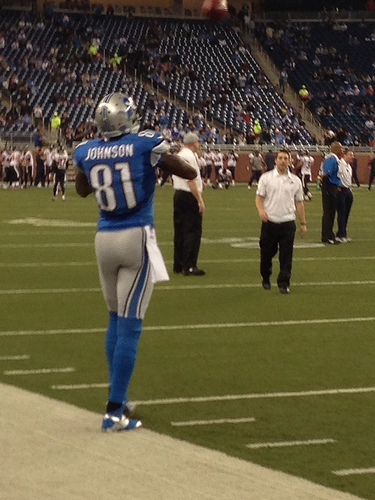 Calvin Johnson has had an amazing career in the National Football League, while remaining humble and a role model for children. He isn’t known for sensational words, but he could still share wisdom and below are some of the best Calvin Johnson quotes, which are motivational and inspirational.

Despite being one of the most dominant football players of his generation, Johnson was never arrogant and was a consummate professional on and off the field. He was always someone that young people and fans could cheer on, while learning valuable lessons about work ethic and much more.

Rarely are professional football players awe-stuck by a fellow athlete but Johnson was someone that even teammates could look up to and aspire to emulate.

I am here to put out a positive athlete.

This is such a simple, yet powerful quotes. Many athletes are only concerned with their own performance and what they are getting out of it. This quote shows that Johnson aimed to be more than that and show what a positive influence a football player can be.

During the season, I dodge the media. After practice, I need to be taking care of my body and recovering.

This is sports performance wisdom that, unfortunately, many athletes don’t get. While some might argue that this just shows that Johnson is shy and smart enough to not get away from the media, he recognizes that taking care of your body is one of the most important things an athlete can do. Rather than spending too much time promoting himself, he would put in extra work doing the things to make sure he would remain healthy and performing at an elite level all season long.

You’ve got to be ready for anything. When it comes to everyone’s opinion, that’s what you’ve got to go through.

The more successful an athlete is, the more haters there will be. Johnson knows that you need to expect negativity, whether it is deserved or not. Rather than dwelling on the negative influences, you can ignore that or use it as fuel to perform better.

Hopefully I can finish my degree before I get done playing and work with my foundation.

Johnson has always understood that there is life beyond football. He left Georgia Tech after his junior season, but always intended to go back and finish his degree. Despite signing one of the largest contracts in professional sports history, he understood the value of a college education beyond dollars and cents.

The work on his foundation is another demonstration of his value as a role model. The foundation was created in 2008 “To change the mindset of youth from struggle to survival, from poor self-esteem to excitement of life, from dependent thinking to goal setting self-sufficiency, and from hopelessness to empowerment.” They provide social development and scholarships to youth who are considered at-risk.

You can’t get down and think things won’t get better or they definitely won’t.

Adversity comes for every athlete at many points in their career. Some athletes get overwhelmed by this and let it negatively affect their play and training for their sport. If you focus on negative thoughts too much, they become reality. If you don’t think you can overcome an obstacle, then you almost certainly won’t. You have to be confident, even in the face of adversity, to keep moving forward.

After being drafted 2nd overall in the 2007 NFL draft, Johnson would go on to have such a dominant career in just 9 seasons that many consider him among the very best wide receivers to ever play the game. In those 9 season, he amassed 731 catches for 11,619 yards and 83 receiving touchdowns. He added 19 carries for 167 yards and 1 more touchdown rushing. In 2012, he set the single season receiving yardage record, with 1,964 yards.

These stats are truly amazing, but what set Johnson apart is the things that can’t be measured in stats. The work ethic, ability to remain humble, and professional are what made it so you could never find a teammate who would complain about him.

These Calvin Johnson quotes might not be as sensational as some of the other great players to play the game. But, like Barry Sanders, you can see genuine wisdom that goes beyond even the game of football.