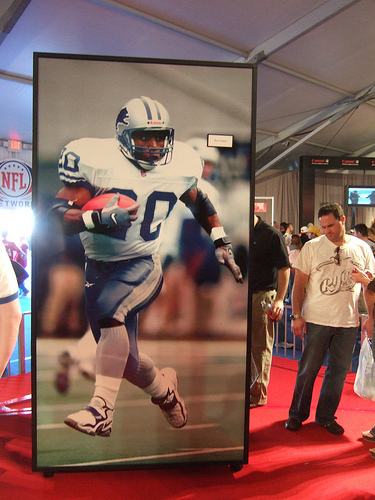 Barry Sanders is truly one of the greatest and most unique football players the NFL has ever seen. While playing for the Detroit Lions from 1989-1998, you could argue that he was the greatest running back to ever play the game.

Sanders play on the field was breathtaking and inspiring. He was known for being nearly impossible to tackle due to his shiftiness and was always a threat to make a big play. He had a tremendous college career at Oklahoma State, where he won the Heisman trophy in 1988. Sanders then had more than 1,000 rushing yards in each of his 10 seasons in the NFL while averaging 5.0 yards per carry for his career.

Sanders has always been soft-spoken and didn’t look to draw attention to himself, as demonstrated by his touchdown “celebrations” that simply consisted of handing the ball to the official. He was still capable of motivating, though. Here are 5 of the best Barry Sanders quotes if you are looking to be inspired by one of the all-time greats:

Sanders forged his athleticism and playing style as a child, playing football in empty parking lots with local friends. While this doesn’t seem important at first, there is an important lesson on sports performance for kids. He didn’t become a great athlete because of some great training facilities or because his parents hired a great private coach. He became great because he developed a love for the sport and made the best of his situation to be able to play and get better at it. You can see in the quote below how some simple playground fun inspired him to be a better athlete.

I’m from Kansas, so there were a lot of vacant lots and open field to tackle each other in so we could avoid tackling each other on the street. But running on the street and trying not to get taken down on the concrete, that will make you fast, that’s for sure.

While Sanders loved playing football, he didn’t judge the success or failure by his performance on the field. He knew that happiness didn’t come from accolades, but from more important things, like family.

Happiness does not come from football awards. It’s terrible to correlate happiness with football. Happiness comes from a good job, being able to feed your wife and kids. I don’t dream football, I dream the American dream – two cars in a garage, be a happy father.

Sanders demonstrated the importance of working hard while patiently waiting for an opportunity while in college. When he first got to Oklahoma State, he was backing up Thurman Thomas, another running back who would go on to have a Hall of Fame career in the NFL. Sanders worked hard and helped his team any way he could. Then, when he had an opportunity to play, he was ready and took advantage.

Sanders believed his spirituality played an important role in not just his everyday life, but also in his performance on the football field. He looked to religion to guide him both in football and in life.

Christianity affects your whole life. I feel I’m more competitive, a better player, but off the field is where there is always a battle.

This simple quote below shows how important perspective is to have in sports performance. Our games or matches might seem really important at the time, but that isn’t all there is to life.

While the Lions didn’t always have great team success while Sanders played, they were always must-watch television because of his ability. You never wanted to miss a snap when Barry Sanders was on the field, because you never knew what he would do next. You can see a few of his many highlights from an amazing football career with the Detroit Lions in the video below.

While Barry Sanders has always been a man of few words, he was still capable of motivating, as seen from his quotes above.