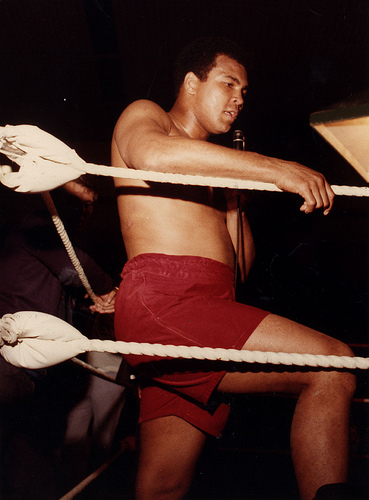 Muhammad Ali is known as one of the greatest and most inspiring athletes of all-time for his tremendous physical talent, work ethic, and domination of his sport.

Never afraid to speak his mind or back down from the challenge, Ali added pressure by declaring himself “The Greatest” and backing it up by becoming the world heavyweight boxing champion.

He was nearly equally as great in the boxing ring and with a microphone in his face. Below are 15 of the best Muhammad Ali motivational quotes.

Ali knew how difficult and unpleasant training could be. Rather than give up, he made the most of his workouts by outworking his competition despite the sacrifices that go along with training at that level.

I hated every minute of training, but I said “Don’t quit. Suffer now and live the rest of your life as a champion.”

Although he was never one to shy away from the spotlight, he knew that wasn’t where champions were made. Championships might be won when people are watching, but they are earned in the quiet months and years of preparation when fans aren’t watching.

The fight is won or lost far away from witnesses – behind the lines, in the gym, and out there on the road, long before I dance under those lights.

Confidence is one of the things that helped Ali stand out among others and has allowed him to be a pop culture icon for this day. He truly believed in himself and everything he was capable of and he exuded that confidence at all times.

It’s lack of faith that makes people afraid of meeting challenges, and I believed in myself.

Ali was certainly his own man. He didn’t conform to what society had intended for him and instead blazed his own trail. Because he didn’t have to deal with what other people’s expectations were for him, he felt free to be the person he wanted to be.

I know where I’m going and I know the truth, and I don’t have to be what you want me to be. I’m free to be what I want.

Success in life rarely comes from playing it safe. If you don’t take risks, you will never know what you are truly capable of. This is a lesson that needs to be learned in all aspects of your life – sports, career, or personal matters. Taking smart risks allows you to push your boundaries.

He who is not courageous enough to take risks will accomplish nothing in life.

The following quote doesn’t have a huge lesson behind it, other than the point of confidence I made earlier. But it is just an awesome quote and the kind of thing that makes Ali so unforgettable. I mean, you have got to be a pretty bad man to be able to make medicine sick.

I done wrestled with an alligator, I done tussled with a whale; handcuffed lightning, thrown thunder in jail; only last week, I murdered a rock, injured a stone, hospitalized a brick; I’m so mean, I make medicine sick.

Affirmations have become increasingly popular in recent years and Ali is one of the people most famous for taking advantage of them. He would constantly repeat phrases about his confidence, constantly calling himself “The Greatest”, so much that he had to believe them.

It’s the repetition of affirmations that leads to belief. And once that belief becomes a deep conviction, things begin to happen.

We have no idea what each day could possibly hold. Bad things happen to people every day, but that doesn’t mean you should live in fear of them. All you can do is focus on the opportunity that you are given and try to make the most with what you have.

Life is a gamble. You can get hurt, but people die in plane crashes, lose their arms and legs in car accidents; people die every day. Same with fighters: some die, some get hurt, some go on. You just don’t let yourself believe it will happen to you.

Although he didn’t lose much, finishing his boxing career with 56 wins and only 5 losses, Ali believed it was important to lose the right way. While we want to “win” at whatever we take on in life, failures happen to all of us and how you respond to that shapes who you are.

I never thought of losing, but now that it’s happened, the only thing is to do it right. That’s my obligation to all the people who believe in me. We all have to take defeats in life.

Ali never expected anyone to feel sorry for him and certainly never asked for it. Whether it be facing struggles during his athletic career, or his fight with illness after, he didn’t ask to be treated with sympathy and only wanted to be treated like everyone else.

Don’t feel sorry for me.

Religion is a big part of Ali’s history and he even changed his name from Cassius Clay because of it. He didn’t believe that religion should only be a part of people’s life when things are going good and that it is very important no matter what they are going through.

God tries you in certain, certain ways. Some people are rich, and they believe in God. They lose the money, things get hard, they get weak and quit going to church. Quit serving God like they did.

This quote below shows just how important wisdom is. Each day is a new opportunity for learning, growing, and evolving. If you are the same person decades from now as you are today, have you really learned anything new or evolved as a person?

A man who views the world the same at fifty as he did at twenty has wasted thirty years of his life.

While Ali was very passionate about his athletic career, it was not what defined him. He earned fame and fortune because of his boxing talent, but he considered his principles and everything he stood for to be much more important that anything he could accomplish in the ring.

My principles are more important than the money or my title.

And the final quote is one that Ali is very well known for. “Float like a butterfly, sting like a bee” is something that can be carried over to all aspects of life. It’s taking the greatest talents of both a butterfly and a bee and making the most out of it.

Muhammad Ali had a tremendous boxing career, as both an Olympic and world champion. He was an amazing talent both in and out of the boxing ring. Few athletes have ever mad an impact that could even compare to the influence he had.

Ali passed away on June 3, 2016 at the age of 74. He is remembered by generations of fans for his tremendous talent, great confidence, and his ability to always provide an inspiring and motivational quote.