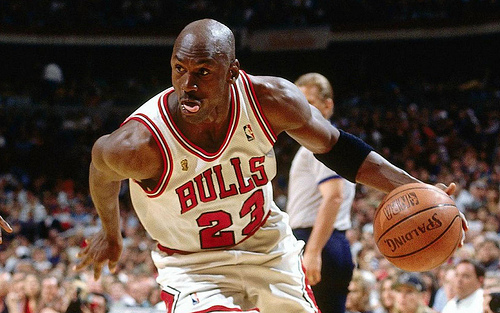 Michael Jordan is arguably one of the greatest athletes of all-time and we can learn many things by looking at the way he approached his sport and worked for greatness.

Jordan’s success on the basketball court and in business is something few have ever approached. His passion and desire to succeed can motivate all of us to achieve our goals. Just reading some of his quotes should be able to fire you up for a training session, a game, or whatever it is you are struggling with.

Below, in quotations, are 5 of the best Michael Jordan motivational quotes:

Failure is something we all run into on a daily basis, but that doesn’t have to get us down. All a failure should mean is that you tried to do something great and didn’t succeed the first time. That doesn’t mean you can’t learn from your experience and succeed at the same thing in the future.

I can accept failure, everyone fails at something. But I can’t accept not trying.

Nothing happens without action. Before action can happen, you must expect something of yourself. If you expect mediocrity, you will get nothing better than that. You should have high expectations for yourself, because that gives you a goal to work towards. The first step to achieving something is believing you can do it.

Again, if you want something to happen, you have to put in the work necessary to make it so. You can’t just blindly wish for it, you have to want it badly and do everything you can to work towards that goal.

Some people want it to happen, some wish it would happen, others make it happen.

People are often looking for some hidden secret to success, when in reality the only thing preventing them from achieving success is the work ethic needed to get there. To become great at anything, you need to put tremendous effort towards that. You may not be an overnight success, but if you put in the time and effort, success will come.

I’ve always belived that if you put in the work, the results will come.

Sometimes the best way to learn something is by doing and failing. Jordan is known for his clutch play late in games, but he had more than his share of failures. What’s important is that he didn’t dwell on them. Rather, he learned from them and used those failures to fuel his desire to become something better.

I’ve missed more than 9000 shots in my career. I’ve lost almost 300 games. 26 times, I’ve been trusted to take the game winning shot and missed. I’ve failed over and over and over again in my life. And that is why I succeed.

While Michael Jordan’s awards and statistics are legendary, his work ethic and determination are even more so. That’s saying something, considering the man is a 6-time NBA Champions, a 5-time NBA MVP, and many consider him the greatest basketball player and athlete of all-time.

After his playing career was over, he applied the same principles from the quotes above to become a success in the business world. Jordan’s insatiable passion for achieving his goal is something everyone can admire.