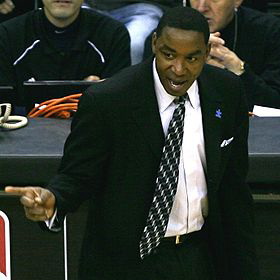 Isiah Thomas had a long career as one of the best point guards in NBA history. Despite his small stature, he always made his presence known on the basketball court, both as a player and as a leader.

Thomas is known for his time with the Detroit Pistons from 1981 to 1994, where he won 2 NBA Championships and was eventually names to the basketball Hall of Fame. Below are 4 of the best Isiah Thomas quotes that you can use for motivation.

Our goal is to win a championship. That’s the only goal.

This quote shows the importance of setting a goal that Thomas had when he was a player. He set one goal and focused all of his energy on that goal. He didn’t allow himself to get distracted with other goals.

It also show how he was committed to the team. As an All-Star player, it would be easy to overlook your teammates and focus more on individual success, but Thomas put the success of the team first, which is part of what made him such a great leader.

Thomas knew what it took to win at basketball. The “Bad Boys” Pistons teams of the late 80s and early 90s were known for their physical play and excellent defense. This commitment to hard work and defense is what made them so successful. They absolutely had talent, with names like Thomas, Joe Dumars, and Dennis Rodman, but their ability to work hard and together as a team is what made them champions.

It’s something that I have been blessed with in terms of playing the game and being able to understand the game. Not being able to exercise that gift while I was out of the game, I really found a void in myself and a hole in my soul. I said the biggest problem that I have had in that time was that I woke up and I didn’t go to the gym. I have been successful in a lot of other areas but not having the ability to exercise the greatest gift that I have, which is basketball, you know I have missed it.

After his career, Thomas realized the struggles athletes can face when they can no longer play their game. Many athletes connect their personal identity with their ability to play their sport, which can be difficult to overcome. Thomas was able to overcome that and eventually become a successful coach, executive, and broadcaster.

If all I’m remembered for is being a good basketball player, then I’ve done a bad job with the rest of my life.

Despite being an historically great basketball player, Thomas saw the big picture. Life is much bigger than the game of basketball. He wanted to be known for more than just what he did on the court, which is a lesson that all young athletes could stand to learn.

Thomas averaged an amazing 19.2 points, 9.3 assists, and 1.9 steals per game over the course of his 979 career games. He retired as arguably the greatest players in Pistons’ history and one of the greatest point guards of all-time.

Since retiring, Thomas went on to coach both the Indiana Pacers and New York Knicks and has also spent time as an executive and in the broadcast booth. His unique playing style and leadership ability helped to make him an inspiring athlete for a generation of fans.