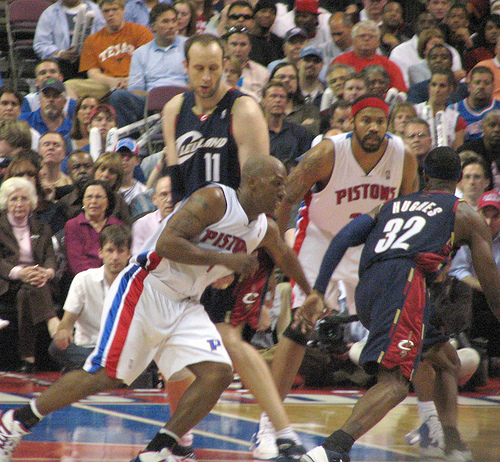 After a slow start to his career in the NBA, Chauncey Billups would develop into a star, a leader, a champion, and become known as “Mr. Big Shot”. If you are looking for some motivation, here are 5 inspirational Chauncey Billups quotes:

As a major professional athlete, Billups knew he was a role model to others, whether he wanted to be or not. Athlete’s can learn from the quote below that they are always being watched and that they can choose to be a positive influence to others or choose to be a bad example. People are always watching, in the good times, and especially in the bad times.

I’m fully aware that every time I do anything, good or bad, somebody’s watching.

Confidence is crucial for athletes. Despite bouncing around as a backup early in his career, Billups never lost his confidence. Instead, he stayed ready for when the inevitable opportunity would come. He had so much confidence because he wasn’t afraid to fail. So many basketball players are afraid to fail, so when times get tough, they give up rather than having to risk failing. Billups pushed through those times because of his confidence, and it would eventually pay off for him in a big way.

I’ve always believed in my abilities. Nobody ever gave me anything in life. I had to work for everything I got. It may have gotten really rocky for a while, but I persevered, because I’m not afraid of failing.

Even the most confidence will have doubts from time-to-time. It’s impossible not to question if you are good enough, or if you will ever get a chance to show what you can do, occasionally. Billups kept fighting through, hoping for the chance to lead, and eventually that time came. Some athletes get discouraged the first time they have a doubt that they let their game slide. Then, when they do get a chance, they aren’t ready for it. It’s important to keep fighting for what you want, because if you fight long enough, your time will come and you can take advantage.

I doubted it a few times, whether I would get the opportunity that I’ve always longed for, and that’s being a starting point guard on a very good team and having a lot of responsibilities.

Even for elite athletes, sports can be a bit of a roller coaster ride. You have to fight through the good times and the bad. You should expect setbacks and disappointments, because they will always come. You shouldn’t be blind-sided by failures. By preparing for them, you will be prepared when the time comes and be able to bounce back. What Billups called guts is what many call mental toughness. Sometimes, the physical battles aren’t the hardest. The mental battles are what you have to fight through.

It’s all about guts. I’ve had so many ups and downs, I’m not scared of being down.

Again, if you are patient and ready, your time will come. Billups eventually hooked up with a team that needed exactly what he could offer, which became a great fit for both the player and team. If you can endure, success will come. At that point, you just need to enjoy the success and keep pushing forward.

The team was looking for a leader who was all about winning, and that’s what they got.

Despite being the 3rd overall pick in the 1997 NBA Draft by the Boston Celtics, Billups was traded midway through his rookie season and would bounce around onto 4 different teams, looking for an opportunity to start at point guard. He finally received that chance when he signed with the Detroit Pistons in 2002.

Given a chance to be a full-time starter at point guard for the first time, Billups would step forward and become a leader for the Pistons and become a star. He was the Finals MVP for the 2004 NBA Champions, and would become a 5-time All-Star.

Billups would last for 17 seasons in the NBA, averaging more than 15 points and 5 assists per game over more than 1,000 career games. Mr. Big Shot’s leadership would eventually turn his team into a champion. These Chauncey Billups quotes can serve as inspiration for aspiring leaders.