Using cornerback drills is the best way to develop young players into learning the skills needed for success at the position. Stopping the run and tackling are great, but the best cornerbacks can cover in both man-to-man and zone defenses.

Cornerback can be one of the toughest positions in football, because they are often on an island, competing with a receiver to see who can make the play. Cornerbacks are often the fastest players on the football field, and they need to be because they have to cover so much ground.

However, none of that speed will matter if they don't have the proper fundamentals and techniques. That is where the cornerback drills below come into play. ​Drills are a great tool for development because they are so efficient at getting a ton of technical reps in very quickly. 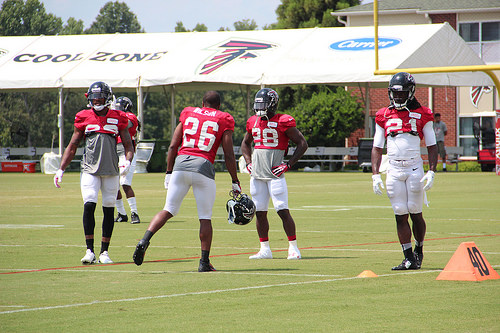 A good corner will be successful in any type of coverage and be able to move all over the football field. Some defensive schemes play left and right corners, while others matchup with a particular receiver and follow them all over the field.

If this is the case​, the corner will need to be comfortable covering a receiver who is split out wide and one who is in the slot. It also helps to have skills to cover backs coming out of the backfield and big tight ends in the middle of the field.

Most of the man coverage drills require at least 2 athletes to perform. One athlete takes the role of a wide receiver to run the route, while the other plays corner doing whatever coverage is being worked on.

Proper backpedal technique is crucial for defensive backs, but they must also be able to transition out of the backpedal to make a break on the football. That is what the backpedal and recover drill is for.

​This is a great drill, because an athlete can do this drill by himself if he had to and would just need a few cones. You can see in the video below, the keys to this drill are a straight and crisp backpedal, staying on the balls of your feet, and then exploding towards the football.

You can set up several cones for this and work on backpedaling and then breaking both left and right towards the cone. If a timer has a stopwatch handy, this is a great drill to time and add some competition among teammates. ​

The video below demonstrates a wide receiver vs. cornerback jam drill. The corner lines up tight to the receiver and attempts to initiate a good jam to slow down the receiver's route and disrupting the quarterback's timing. The goal is to slow them down within the first few yards of the line of scrimmage.

This video demonstrates soft press man coverage. This is where the corner lines up tight to the line of scrimmage, but doesn't aggressively jam. The goal is to stick with the receiver and force a pass to the outside.

The video below demonstrates off man coverage with former NFL cornerback Nnamdi Asomugha. You start 7 yards off of the line of scrimmage. Begin with a solid backpedal, pay attention to the receivers hips, and stick with them when they make a cut.

In this video, the receiver makes an out cut. In that scenario, you undercut the receiver and knock the ball down with your upfield hand. You don't want to do a crossover with your arm to knock it down, because that would put you out of position to make the tackle if the receiver does make the catch. ​

Zone coverage drills can be a little trickier, because they usually require more than just 2 players. It just makes sense that you would need at least a few offensive players, so the corner wouldn't automatically know who would be in his zone.

It is important that all defensive backs are aware of their responsibilities and what zone they need to cover. It is also important that they stay in a good position in the middle of the zone and are paying attention to any receivers breaking into the zone. ​

This drill moves the alignment of the corner 2 yards inside the receiver that is in his zone, which can be used in quarters coverage as shown in the video. The zone flip is a technique that allows the corner to see both the quarterback and receiver by turning  his back to the sideline.

The video below demonstrates how to cover the deep seam in zone defense. The seam is the area between the 2 zones of defensive backs. The defensive backs are responsible for a deep third of the field.

The quarterback passes the ball to the receiver that is breaking deep down the deep middle seam, which should cause 2 defensive backs to converge on the football and should be able to knock it away. ​The defense has their eyes on the quarterback while they watch the routes progress.

It would just be too easy if there was only ever 1 receiver in a defensive back's zone, in this case in deep third coverage. This drill prepares the DB for instances where 2 or more passing targets are in the same zone. The defensive back is aware of both passing targets and reads the quarterback to see where the football is going. When the ball is released, he makes a break on the ball.

There are few things a cornerback can do to change a football game more than making an interception followed by a big return. While an interception is what every CB wants, sometimes just knock the ball down can be as effective.

A good defensive back will only go for a pick if he is sure he can get it and the receiver can't. The goal of an interception drill is for the defensive back to understand the timing of a pass and be able to high point the football while having soft enough hands to pull the ball in.

​The video below shows a basic interception drill. The cornerback is in coverage when he reads the quarterback's eyes. The football is thrown deep down the field and sprints after it to make the catch.

The video below shows a similar drill, but the corner is in deep coverage and has to break forward to make the interception.

When corners are out on an island, they may be the only player who can stop a big play from happening. While they don't have as big of a role in run support as safeties, poor tacklers at the CB position will be targeted on toss sweeps and similar plays.

The video below demonstrates a block shedding drill. Despite being undersized, corners need to fight through blocks of bigger players, like tight ends, fullbacks, and the occasional offensive tackle.

The goal of the defensive backs in the video below is to string out the blocker and not get pinned outside. Corners are the last line of defense on the outside. If they get pinned inside, the back can cut around him and will likely have plenty of room.

Stringing the play out is good for 2 reasons. First, it keeps the running back from seeing open football field to the outside where there is no backup. Secondly, it slows down the running back or forces them to cut back, where all the help defenders are pursuing. ​

Whether it is after a completed pass or coming up in run support, good, solid tackling ability will allow corners to prevent big plays from developing. Because they are usually the smallest defenders on the field, cornerbacks need good fundamentals to bring down anyone from a shifty receiving back to a big, strong tight end.

The video below demonstrates youth form tackling drills. A good tackle breaks down in front of the back, wraps up the ballcarrier, explodes their hips into them, and ultimately brings them down. ​

​Being able to cover in both man-to-man and zone defenses is the most important part of playing cornerback in pretty much any defensive scheme, but helping to stop the run and end the play with a solid tackle is also crucial.

In some schemes, corners may play a combination corner/safety role or at least spending part of the time covering a deep third or half of the field. They may also need blitzing skills, although these are used rarely.

Many of the skills and drills of the safety position ​are the same, although there can be some differences, as they are often tasked with covering bigger players and play a larger role in the run game.

These are hardly the only cornerback drills out there but they will give you a great start on developing the proper fundamentals of the position and they target all of the major areas that lead to success.