Defensive tackle drills are important for developing the skills need to play the position at a high level. They are often the biggest and strongest players on a football field, but they need good technique to get the most out of that strength.

While their job can seem simple to outsiders, the role of a defensive tackle can be quite complex. ​They need to keep their gap containment, which could be 1 or 2 gaps, and not allow the offensive line to get any movement in the running game. Athletic DTs who can push the pocket can really hinder the opposing offense. 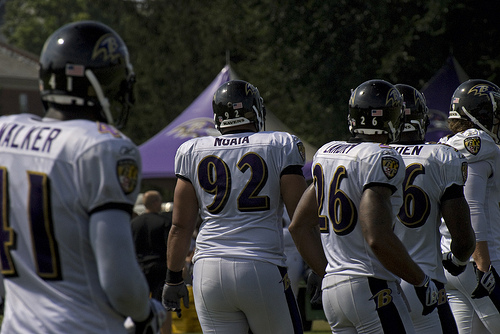 4-3 defensive schemes can use 1 or 2 gap defensive lineman. Again, the 2 gap defensive tackles will be less aggressive, while the 1 gap defenders are usually more athletic and expected to penetrate the line of scrimmage.

Most defenses require a mix of these skills and ask the DT to line up in different spots. ​They may line up across from either of the offensive guards or center. They may also line up shaded on one of the interior lineman or straight up in a gap.

Drills are a great choice to work on these skills because they are fast and can work a lot of skills in a short period of time. ​Some drills only require 1 athlete and a bag, while others can be done with just 2 athletes.

Defending the run is where defensive tackles make their greatest impact. They need to be able to both occupy space and shoot the gap to make a play in the backfield, depending on scheme and position.

A great stance, explosive first step, and a powerful punch are crucial in defending the run. Defensive tackles can allow offensive lineman to get their hands on them and move them wherever they want to create a hole. ​

A good DT can read the play as it develops in front of him and see where the football is going. From there, they need to shed the block and, without getting too deep past the line of scrimmage, pursue the running back down the line of scrimmage. Being over-aggressive here could cause the tackle to get too deep and allow a play to develop behind him. ​

Playing the run effectively requires a great stance and first step. Some defensive tackles prefer a 3 point stance while others use a 4 point stance. The stance and get-off drill can be use to work these skills.

This drill uses 2 pads to stand in for an offensive guard and center. ​The focus is on developing a good, consistent stance and shooting to the right gap when the football is snapped. Doing the drill in this manner, with pads, allows players to get plenty of reps in with different stances.

The stance and start drill is another good choice for developing the stance and first step explosiveness. The goal is to have a good stance with an explosive first step to make contact with the blocker first.

This drill uses 2 players, 1 as a blocker, and 1 as a defender. ​When in a 3 point stance, the off hand is used to attack the offensive lineman before he can make contact. Other important concepts include mirroring the offensive lineman and always taking the first step forward, as demonstrated in the video below.

Getting off of a block is vital for defending the run. If an offensive guard or center is able to get his hands on the DT and move him wherever he wants, a huge hole will open up for the running back to slide through.

It is important to get off of blocks and find the football, which is where the shedding and tackling drill for defensive tackles come into play. As you would guess, the goal is to shed the block, find the running back, and wrap him up.

You can see and example of this drill in the video below​. There are 3 players used for this drill - 1 defender, a blocker, and a ballcarrier. When the running back chooses his hole and makes his cut, the defender has to find him, shed the block and meet him in the hole.

While pass rushing isn't usually considered as important for tackles as it is for ends, defensive tackles can play a huge role in rushing the passer. After all, the fastest route to the quarterback is a straight line.

Most pass rushing moves for defensive tackles or strength based in nature, but a great speed rusher at the position can give the offense fits and potentially blow up any passing play. ​

While there are many different moves a DT could drill to work pass rushing skills, the most important aspect is the start. A good stance, explosive first step at the snap of the football, and strong punch can give any defensive lineman the edge. ​

The bull rush can be a strong defensive tackle's bread and butter in pushing the pocket and putting pressure on the quarterback. It is a classic display of brute strength. If a DT is able to control and offensive lineman and push him back in the pocket, the offense will be severely hindered.

The bull rush drill in the video below uses 2 blocker and 2 defenders, with a dummy standing in for the quarterback. ​It is important for the defensive tackle to attack forward with open hands, which he uses to make contact with the offensive lineman and push him back.

A strong punch will push the the guard or center backwards if he is already setting up in pass protection. The defensive lineman the lock's out his arms so the blocker can get his hands on him.

​While the bull rush is pure strength, the speed rush is all about, well, speed. With a good bull and speed rush, the DT will be able to develop other pass rush moves of off these to really keep the offensive line guessing.

This speed rush drill helps with watching to see the ball snapped and getting an explosive get-off at the snap. The defensive tackle is focused on the football at the start of the drill and as soon as the ball moves, he explodes off of the line of scrimmage to attack the backfield.

This drill is great for passing situations. Because the offense knows the cadence and the defense doesn't, defensive lineman have to be quicker off the snap if they want to beat the offensive lineman. ​

The towel drill is a great choice for defensive tackles to work on speed rushing technique. 2 players are needed for this drill, a blocker and a defender. A towel is placed on one side of the blocker's heel to be used as the target.

The DT lines up shading the outside shoulder of the blocker. The goal is to rip or swim past the block and reach down and grab the towel. It is important to have a quick first step, make contact with the blocker, and stay low enough to reach the towel. You can see what it looks like in this video:​

There are many more drills that could be used to develop skills. There are countless drills that could be done just to work on each of the pass rush moves alone. The most important part of playing the position successfully, though, is a good first step with a solid base and an ability to fill up the gap(s).

Using a good mix of defensive tackle drills will develop all of the skills needed for a DT in both the run and pass game. With these skills, the tackle can clog up the run and push the pocket when defending the pass.