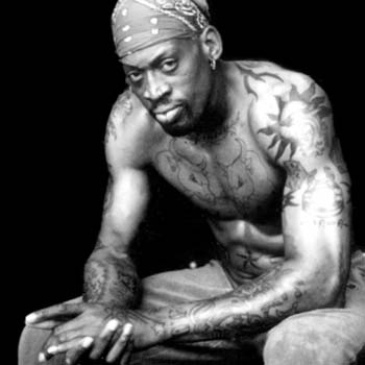 Dennis Rodman is one of the most interesting characters in basketball history. He was a dominant defender and rebounder during his time in the NBA and you can get a peak into his mindset in these 5 Dennis Rodman quotes below.

Rodman was known for sacrifice his body during a basketball game if that is what it took to win. His effort was rare as he fought on every play and chased down every rebound, even if he had to dive head first for it. At just 6’7″ and 220 pounds, he was undersized for a power forward, where he played for most of his career, yet he was one of the more physical defenders in the NBA. Rodman embraced the physical aspects and the pain, knowing that it just came with playing the game that way.

I go out there and get my eyes gouged, my nose busted, my body slammed. I love the pain of the game.

With 11,954 career rebounds, Rodman was certainly known for that ability. While he may not have ever been able to make rebounds as popular as a Michael Jordan dunk, he did inspire many young athletes to learn the craft of offensive and defensive rebounding.

I want to do for rebounds what Michael Jordan did for dunks.

Every time a shot was taken on the court, Rodman considered the rebound to be his. He would relentlessly attack the basketball until he got his hands on it. He had great timing, athleticism, and overall jumping ability, but it was his effort that set him apart. He took every shot as a challenge that he could get the rebound and that he wanted it more than the other team.

I’m hungrier than those other guys out there. Every rebound is a personal challenge.

Scoring is the most important stat for most basketball players, but not Rodman. He was confident in his ability to score the basketball, but was not known for that. Despite averaging double digits in points per game just once in his long career, Rodman was two-time All-Star and considered one of the best players of his generation. Instead, he focused on the stats where he could make the most impact on winning the game, like rebounds.

I can score 20 points if I want to, but that’s not my desire.

This list wouldn’t be complete without a little Rodman wisdom. Chemistry is important in basketball, which he should know as well as anyone. Rodman was a member of 5 teams that won the NBA Finals, with 2 different organizations. He knew how important it was for teams to play together and as a team that makes the most out of each players’ abilities. He displayed how important this was by becoming the ultimate team player and filling his role excellently.

You watch some teams these days and you wonder if they just met on the playground and decided to choose up sides.

Rodman had a long, interesting, and productive career in the NBA. He was just the 27th overall pick, a 2nd rounder in those days, in the 1986 NBA draft by the Detroit Pistons out of Southeastern Oklahoma State. In 7 seasons with the Pistons, Rodman was a 2-time rebounding leader, a 2-time Defensive Player of the Year, and a 2-time NBA Champion.

He would go on to have a productive career with the San Antonio Spurs, Chicago Bulls, Los Angeles Lakers, and Dallas Mavericks. While with the Bulls, he would win 3 more NBA championships.

Rodman put up some amazing rebounding numbers over the course of his career. From 1992 until 1998, he led the league in rebounding all 7 seasons. This included averages of 18.7 rebounds per game in 1992 and 18.3 per game in 1993. That streak spanned 3 different teams.

In total, Rodman was a 5-time NBA Champion, 2-time All-star, 2-time Defensive Player of the Year, and a member of the All-Defensive First team an amazing 7 times. Rodman’s number 10 was retired by the Pistons in 2011. Also in 2011, he was inducted into the Pro Basketball Hall of Fame.

Over 911 career games, he would average 7.3 points and 13.1 rebounds per game. Rodman’s impact on the game was felt from the Detroit “Bad Boys” teams to the second Bulls 3-peat teams. His unique personality and playing style made him one of the most fascinating players of his generation and these Dennis Rodman quotes give you just a small look into a one of a kind athlete.