The Erica Durance workout and diet

Playing a superhero's better half comes with major expectations from comic book fans.

Erica Durance, best known for playing Lois Lane in the Superman prequel Smallville and Dr. Alex Reid in Saving Hope, has been able to meet and exceed those expectations with both her acting skills and her physical toughness.

Durance has followed a serious workout routine consisting of a variety of exercise types and a strict diet plan that consists of quality protein sources and plenty of green vegetables. 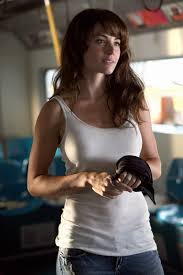 Erica Durance as Lois Lane in Smallville - Photo By: The CW

Durance typically works out up to 6 days per week, sometimes for up to 2 hours per day. She has plenty of variety in her training and usually mixes it up with some combination of the following, while listening to Eminem and 50 Cent:

Mixing up workouts is a great idea because it always provides the body with a new stress. Weight training can help to build lean and toned muscle mass, while also burning away extra body fat, along with cardio.

Durance shared what a sample workout of hers would look like in a 2006 interview with Self Magazine. The 7 exercises she would perform are listed below. These are lighter exercises that can be done with reps in the 10-15 range or higher.

You can perform the back-to-back in a circuit for a good workout that works the entire body. As you get stronger, you can either increase the weight of the resistance or push yourself for a faster time. You can see demonstrations of the listed exercises, performed by Durance, in the video below.

Durance shared a little bit about what her exercise routine is like today in a an interview from the Winter 2014/2015 issue of Real Style Magazine. While she has been fit for most of her career, she got a personal trainer for the first time after getting pregnant to make her baby's health a priority.

I’ve never had a trainer before. I did that specifically because I wanted to train properly and do the proper types of exercises that are needed at this time in my life. This year’s focus is to be healthy and to maintain for my baby. After that, I can get into punishing myself a little bit more!

Related: The Teri Hatcher workout and The Laura Vandervoort workout

Breakfast for her usually consists of a beet and vegetable juice most of the time, except for french toast on weekends. Other than that, she really aims to reduce the amount of sugar that she has, especially later in the day. The priority foods in her diet are:

Durance gets the majority of her calories earlier in the day and eats less as the day goes on. She eats smaller meals throughout the day, rather than just 2 or 3 larger meals that would give her an energy crash. This diet gives her more consistent energy which helps her with both her workouts and her hours on set.

Erica DuranceOn what her diet plan focuses on

I’m eating more often during the day now, so I don’t get the huge sugar crashes and then eat things that I shouldn’t be eating. I do have a heavier protein, little bit less carbs, diet but I still believe carbs are necessary because they help break down the protein. My father-in-law says this, “You eat like a king in the morning, a prince in the afternoon and a pauper in the evening.” It’s minimizing those heavier foods to the beginning of the day. Then after, it’s just sticking with a more strict diet of protein and greens and less sugar.

Erica Durance has had a lo﻿ng caree﻿r in both television and film. Though she may be best known as Lois Lane opposite Tom Welling's Clark Kent in Smallville, she is also the star of Saving Hope, and has appeared in several other TV programs and films such as The Butterfly Effect 2.