The fullback is one of the most versatile positions in football. A fullback needs to be able to lead block, pass protect, carry and catch the football.

Fullback drills need to be designed specifically based on the scheme of the offense. While there are multiple skills a fullback needs, many offenses don't require major use of all skills, so it is important that the main skills needed are emphasized.  ​ 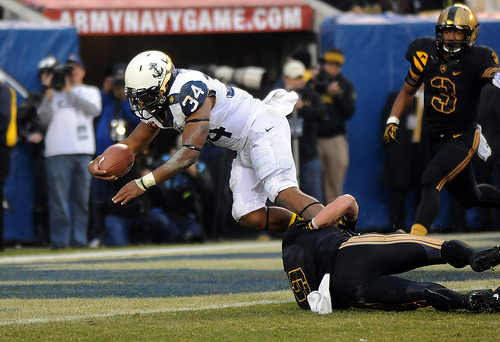 Run blocking is the most traditional skill needed for fullbacks. In practically any offense that uses a fullback, run blocking is the number one priority. They must have proper footwork and hand placement to be able to block defenders who may have a physical advantage on them.

The lead blocking for a running back that fullbacks do is very unique. They have to be able to clear out any defenders left in the hole that the running play is designed to create and they have to do it quickly to give the tailback space.

Walling off defenders and creating a hole for the running back is the main goal of any run blocking drill. ​The video below shows proper footwork and hand placement for lead blocking.

The drill below demonstrates the moving target that fullbacks have to deal with when run blocking. Unlike offensive lineman, fullbacks may be 6-8 yards or more away from their blocking assignment when the football is snapped. They have to be able to react to a moving target to prevent the defender from making the tackle.

Pass protection can be very important for many fullbacks. Fullbacks don't always have a large role in the passing game, and when they do, it may be more blocking than receiving. While fullbacks aren't generally going to be matched up with a defensive lineman one-on-one, unless a play breaks down, they still have to prepare for a variety of potential blocking assignments.

The video below demonstrates pass protection drills for running backs and fullbacks. ​The video is of the Miami Dolphins running backs at an Organized Team Activity camp. It focuses on using proper stance and hand punch to slow pass rushers down.

The video also demonstrates the different types of pass blocking that may be used. ​There is different technique used when a blitz is coming from the A or B gap versus an outside pass rush.

Pass blocking technique is absolutely crucial for fullbacks. They often will be matched up with a faster linebacker or defensive back who is blitzing. They may also have to help block a defensive lineman who is much bigger then them. ​

The amount of carries that a fullback gets in a game is highly dependent on the offense. In many high schools and even some colleges, the fullback can be a featured runner. In the NFL, the number of running fullbacks continues to dwindle and it is now very rare.

Again, the exact rushing fullback drills is very dependent on what the fullback is asked to do. If the only carries the fullback receives is an occasional dive on 3rd or 4th and short, that requires different skills than if they are a lead ball-carrier.

​Even fullbacks who carry the ball a lot, though, aren't used like tailbacks. Fullbacks are generally no-nonsense straight ahead runners. Their goal is to get moving forward as soon as possible. There shouldn't be many fancy moves to their style.

The video below shows a running back drill that focuses on the back finding the hole quickly. The back has to find the hole in the defense and get downfield as soon as the hole develops. ​

Even if the fullback in your offense doesn't receive major carries, basic footwork is important for when they do. Proper footwork can help them get through traffic and defenders in the middle of the field and get extra yardage. In the video below, Baltimore Ravens running back Justin Forsett demonstrates basic footwork drills for running backs. Forsett uses an agility ladder to work on footwork.

One other important drill for fullbacks, whether running or catching the football, is ball security. Fullbacks often are being tackled by bigger defenders and carrying the ball in traffic, and they must be reliable protecting the football.

The video below demonstrates how to tuck the football away and secure it from defenders after receiving a handoff or securing a catch. ​

Catching the football is an important skill for well rounded fullbacks. Route running, catching and securing the football, and run after the catch ability can make the fullback a weapon in the passing game.

The fullback doesn't usually get moved around much in the passing game. They will generally line up in their traditional backfield position or occasionally get used in a move tight end role. Their routes are usually run close to the line of scrimmage and are usually a dump-off option for the quarterback. As the last option, their goal is to secure the catch and look for the first down marker. ​

The drill below shows the importance of getting downfield after the catch. The actual route or part of the route tree used isn't necessarily important for this specific drill. The important part is catching the football, securing it, and quickly transitioning into picking up yardage.

The best fullback drills are based entirely on what offensive scheme is being used. Lead blocking, pass protecting, running and receiving are all important skills for a fullback.