What is the Fullback Position in American Football? 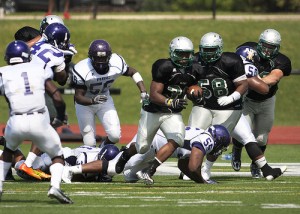 The fullback position is one of the most unique positions in American Football. They have many responsibilities, although they are being phased out in many offensive schemes.

What is a fullback? The fullback lines up in the backfield, generally behind the quarterback. They may occasionally move around the formation and line up in different positions, but that is dependent on the offenses and the player’s ability. The primary responsibility is usually lead blocking for the running back. Depending on the offense, fullbacks are also needed for pass protection, running the football, and catching the football. The amounts of each skill needed varies greatly with different teams and offenses.

Fullbacks are becoming less popular in the NFL, but still have a major role in many high schools and colleges. In 2013, ESPN writer Jeffri Chadiha went as far as calling fullbacks an “endangered species” in the NFL.  Chadiha would say that “no position in the NFL has been marginalized more than fullback over the past decade.”

Many NFL teams no longer even carry a fullback on the roster. As the league shifts to more pass-heavy and spread offenses, the need for a lead blocker is lessened. Many offensive sets instead use multiple tight ends or three or four wide receivers. Even the fullbacks still used often play limited snaps or even play the majority of their plays on special teams.

Another reason for the lessened use of fullbacks is that many college offenses are now also pass-heavy. This gives a smaller pool of fullbacks to be developed for the NFL.

Lorenzo Neal was one of the best lead blocking fullbacks in recent history. Neal played in the NFL from 1993-2008, most notably with the San Diego Chargers. Despite retiring with just 807 career rushing yards, Neal was a four-time Pro Bowl selection. This is because Neal earned a great reputation as a lead blocker by blocking for a 1,000 yard rusher every season from 1997 to 2007. Neal was a big part of many of LaDainian Tomlinson’s massive seasons.

Today, the Buffalo Bills Jerome Felton is one of the best lead blocking fullbacks. Despite having less than 200 career rushing yards, Felton signed a free agent contract with the Bills in 2015 to become the second highest paid fullback in the NFL, with a 4 year deal with a $2.3 million annual average. Felton is proof that a quality lead blocker can still have a major impact in the running game.

Lead blocking fullbacks are escorts for the tailback on the football field. They are used to clear holes and make way for the running back. They are often used for one-on-one run blocking with linebackers.

Some fullbacks are also used for pass protection, although this is becoming less common. Fullbacks are often replaced with an extra wide receiver or tight end in obvious passing situations.

Mike Alstott is one of the most famous fullbacks in recent history. Alstott drew a lot of attention for his physical and aggressive running style. Alstott was a fan favorite during his career with the Tampa Bay Buccaneers, which lasted from 1996-2006.

Alstott has been one of the most recent fullbacks to be a major feature in an NFL team’s offense. Alstott had several seasons with a feature role, including 949 rushing yards in 1999 and 10 rushing touchdowns in 2001. The video below highlights Alstott’s no-nonsense, physical running style.

Marcel Reece of the Oakland Raiders is one of the best rushing fullbacks in the NFL today, with a unique size and speed combination. Despite this, he has career bests of just 59 carries and 271 rushing yards from the 2012 season.

A rushing fullback is most commonly used for between the tackles running. This is often dive plays on 3rd or 4th and short when only a yard or 2 is needed. They are needed to get downfield and protect the football with power running instead of fancy moves.

Larry Centers is one of the greatest receiving fullbacks in NFL history, with 827 career receptions. Centers was a 3-time Pro Bowler while playing in the NFL from 1990-2003. Centers even had a 101 reception season for the Arizona Cardinals in 1995.

Again, Reece is one the the best receiving fullbacks today, with career bests of 52 catches for 496 yards in 2012. He is one of the rare fullbacks to be a capable big play threat, as evidenced by his 73-yard receiving touchdown below.

The receiving fullback is often the quarterback’s last resort or dump-off option. They are responsible for making the catch and then looking for the first down marker or getting as much yardage as possible.

The fullback position’s role may be decreasing in many offensive schemes, but a talented and versatile fullback can still be a major asset to any offense.