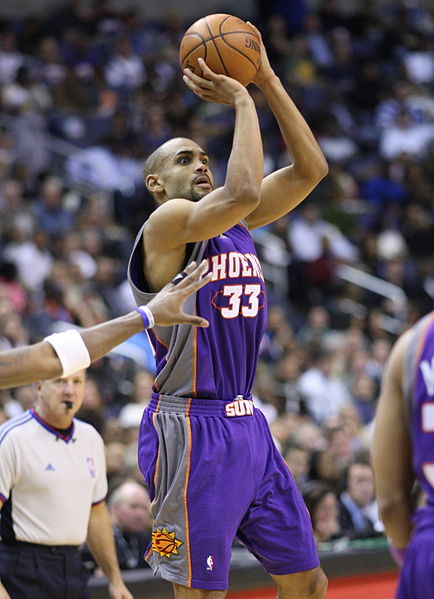 Grant Hill was a superstar early in his NBA career until injuries struck. He would overcome multiple devastating injuries to have a long and productive basketball career. If you are looking for some motivation or inspiration from him, here are 5 of the best Grant Hill quotes for how he mentally overcame multiple injuries.

Athletics in general, and professional basketball in particular, puts a tremendous amount of stress on each player’s body. It is extremely demanding to play multiple games a week and mix in practice, lifting, watching tape, and so much more.

All of these things are requirements for high level athletes. They have to continue to do these things so they can perform to the degree that is expected. That amount of work puts a tremendous strain on your body that can be hard to recover from.

That is why elite athletes learn that taking care of their body is the most important thing they can. From sleep to nutrition to advanced recovery techniques, it is absolutely crucial that athletes put time and effort in to just prepare their bodies for the demands of the next day.

People don’t realize the amount of stress you put on your body both physically and mentally from just the wear and tear of a season.

Even when Hill was away from the game and couldn’t play or practice at full speed, he worked at improving his craft. When he got to the point he could do some exercise, he would do everything he was allowed without risking further injury. Drills and other training were used to prepare him for when he could get back in a game.

While in the initial stages of an injury drill work might not be possible, you can still do things to improve your game. It could be watching tape or even helping a teammate understand important concepts or coaching a youth team. It may not seem that these things will translate directly to basketball, but anything that can be done to further your knowledge of the game will help you when you get back on the court.

I’ve done a lot of basketball drills, not a whole lot of competitive stuff. I have basically been in the gym everyday working on my game, working on the time off that I’ve had from the game, just getting myself prepared mentally and physically for the season.

Injuries suck, there’s no way around it. All you can do is everything that you are supposed to do in your rehab and hope for the best. There are no guarantees when it comes to the human body. You just have to take care of your body and trust that it will work in the long run.

Even with medicine, you can do everything right and something can happen. That’s just the nature of it.

The mental challenges of injury can sometimes be worse than the physical side. It can require several hours per day of rehab and still cause pain in your daily life. An injury that constantly hurts is always on your mind and can be a real struggle to fight through.

You are not going to have the answer to everything. You can only control what you can control. Effort is the most important thing. If you work hard, you won’t have success 100% of the time, but you will always give yourself the opportunity to succeed.

I wish I had the answer but I don’t. We’ve got to continue to try to play hard and work through it and try to figure out what we can do to improve that.

After a stellar career at Duke, Grant Hill would have a great start in the NBA after being the 3rd overall pick in the 1994 NBA Draft by the Detroit Pistons. Hill was a dynamic all-around player who could score, pass, rebound and defend from the small forward position. He was a Co-Rookie of the Year in 1995 and finished 3rd in MVP voting in 1997. He was a very popular player and was often among the leading vote-getters for the All-Star game.

Hill’s injury issues began around the same time he signed with the Orlando Magic in 2000. In his first 4 seasons with the team, he would only be able to play in 47 of a possible 328 games. Hill fought back but was still plagued by multiple injuries and considered retiring in 2007.

Hill’s dedication would allow him to play in all 82 games for the Phoenix Suns in 2009 and he would start 81 games a year later. This is incredibly inspiring considering what he went through that he could return and be a productive starter for a playoff team.

In 18 seasons in the league, Hill would average 16.7 points, 6.0 rebounds, and 4.1 assists over more than 1,000 career games. These Grant Hill quotes show how much of a challenge it was to fight through injuries, but he was able to endure through them and re-shape his game to become a productive player again and be an inspiration to anyone struggling with injuries.