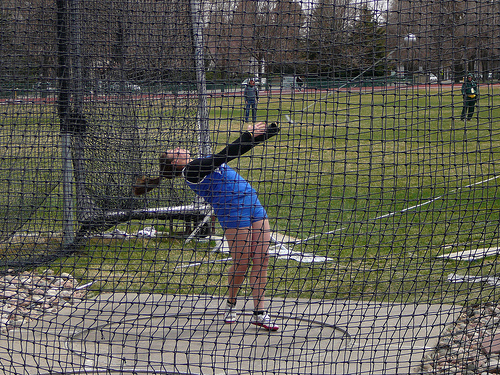 The hammer throw is only an official track and field event for one state in the United States today, but it has grown in popularity at the youth club level, and you see more and more athletes trying it out every year.

The increased popularity has shown as competitions are popping up across the United States and technology has helped information spread. The fact that both the boys and girls national records are from recent years shows that the event is developing at a slow, but steady pace. While the hammer is only an official high school event in Rhode Island, that hasn’t prevented it from showing up in different pockets throughout the country.

Below is video of Winkler’s record throw from 2013. He would go on to compete for Cornell University in the hammer, weight, and discus throws. Walter Henning and Conor McCullough really helped to push the national records forward on the boys side in the first decade of the 21st century. Prior to Winkler’s mark, McCullough previously held the record with a distance of 259’10” in 2008. Before McCullough, Henning was the record holder.

Ashe would go on to compete for the University of California and University of Georgia at the collegiate level in the hammer and weight throws.

The hammer throw is still a relatively obsucre event to the general public, but the increased spread of training and technical information and popularity of youth throwing clubs with quality coaches will help to grow the event and potentially challenge these distances in the coming years.