The discus throw is one of the oldest events in track and field. You may have seen part of a competition before but had questions about its history, rules, record, training, and techniques, all of which you can learn about below.

The event requires a mix of strength, speed, and technique. A technically good throw that catches the wind just right can be one of the most beautiful things to see at a track meet at any level - high school, college, or beyond. 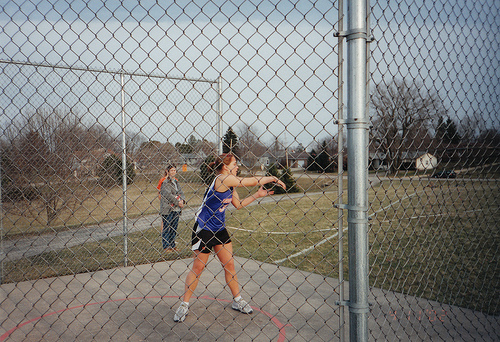 A standing throw at a youth discus competition - Photo By: k.steudel

The discus throw has been included in track and field meets for men since the first modern Olympic Games in 1896 and was officially added for women in 1928, but the history of the event dates back much further.

​A classic version of the discus goes back many centuries and the image of throwing a heavy disc-shaped item was commemorated with the Discobolus sculpture. The image of a man preparing to heave the disc is believed to originate from somewhere around 450-460 BC.

The most important part is that you throw the discus between the sector lines and don't leave the circle until the implement lands. If you'd like a more detailed look at the rules, you can find them below.

If you are just getting into the sport, it is only natural to want to know how far people have thrown it before. Below are the United States National High School records and the world records for males and females. You can find the complete discus world record progressions here.

You really only need a few essential items to get started throwing the discus. You could get by with a cheap rubber discus and an open field, but ideally you will want these items to get quality training in:

The full spin discus throw technique has been the predominant form used in modern throwing. Frantisek Janda-Suk, a Czech athlete, is credited as the pioneer of this technique. He began practicing this way in 1899 and became good enough to win silver at the 1900 OIympics.

The full spin technique consists of rotating the body around and across the circle before releasing the disc into the sector. Explaining the technique is much more involved than that, but you can get an idea of what it looks like by watching the video below. ​

The video shows the technique of Piotr Malachowski of ​Poland on his way to winning the 2015 IAAF World Outdoor Track and Field Championships in the discus with a throw of 67.40 meters. You can also see Philip Milanov of Belgium, who finished second, and Robert Urbanek of Poland, who finished third.

Junior high and high school throwers will usually use the spin eventually, but they may not compete with it for a while if they do not have the technique down. Many will compete with just a standing throw or half turn until they learn better technique or become more comfortable with it.

Watching a technically solid discus throw hit the air can be one of the best sites in track and field. A great discus thrower combines strength, athleticism, and technique to get the most out of the throw.