A new world record discus throw has been officially ratified 42 times for men and 55 times for women by the IAAF. Discus has obviously come a long way since the early 20th century.

So who has had the longest and farthest discus throw in history? See the chart below to find out. 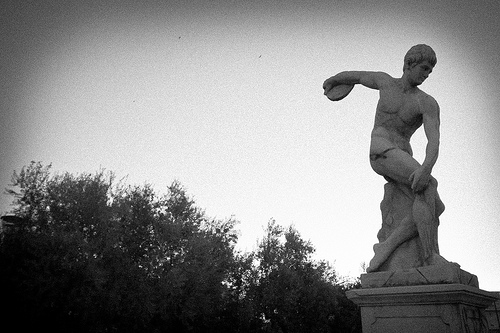 The current men's world record in the discus throw is 74.08 meters, or 243 feet, set by Jurgen Schult. Competing for East Germany, the record was set on June 6, 1986 in Neubrandenburg, East Germany. Below is some old-school video footage of the throw.

The first officially ratified world record in the discus throw was set by James Duncan of the United States on May 27, 1912. Duncan recorded a throw of 47.58 meters or 156 feet and 1 inch. This mark held up for more then 12 years, when it was beaten by just 3 centimeters by Thomas Lieb, also of the United States.

Below is a table of all the progression of the men's world records in the discus throw:​

In total, an American has set or furthered the world record on 28 different occasions. Fortune Gordien, Al Oerter, L. Jay SIlvester, and Mac Wilkins led the way by each setting the record on 4 separate occasions. Wilkins actually set the record 3 times on the same day, May 1, 1976 at a meet in San Jose, California.

While the men's record is from 1986, it has been threatened in recent years. The most recent example is Gerd Kanter of Estonia. He threw a distance of 73.38 meters in 2006.​

The current women's world record in the discus throw is 76,80 meters, or 251 feet and 11 inches, set by Gabriele Rensch. Also competing for East Germany, Rensch made the record throw on July 9, 1988 in Neubrandenburg, East Germany. You can find video of the throw below.

​On September 23, 1923 in Paris, France, Yvonne Tembouret of France set the first ratified women's discus world record with a throw of 27.39 meters, or 89 feet and 10 inches. This record would only stand until the following July.

Below is a table for the progression of all the women's discus throw world records:​

A few women have dominated the world record progression list. Faina Melnik, a former Soviet Union thrower, set the record 11 times between 1971 and 1976. Gisela Mauermayer of Germany and Tamara Press, also a former Soviet discus thrower, set the record 6 times each. Mauermayer's records were all set in 1935 or 1936, while Press's marks were spread out between 1960 and 1965.

A woman wouldn't pass 100 feet until Maria Vidlakova of Czechoslovakia did so in October of 1925.​ It wasn't until November of 1967 that a woman would pass 200 feet. Liesel Westermann of Germany was the first to accomplish this. The first woman to throw further than 50 meters was Nina Dumbadze, competing for the Soviet Union in 1948. Westermann crossed 60 meters in 1967. 70 meters was finally crossed by Faina Menik, competing for the Soviet Union, in 1975.

The women's record is from 1988 and it hasn't really been threatened in recent years. Sandra Perkovic of Croatia​ has been the closest threat lately, with a distance of 71.08 meters in 2014.

While both records have stood since the 1980s, that doesn't mean they will last forever. As training information, technology, and proper technical information continue to spread, it is only a matter of time before there is a fresh set of records.

is it possible to get high from claritin.