Shot put is the purest test of strength in track and field, but it also requires speed, balance, coordination, and timing. The event has been the most well-known throwing event since its formal creation in the 1800s.

Whether you are a stranger to the sport or just looking to boost your fundamental knowledge of throwing or coaching, this guide will get you up to speed by giving information on rules, training, techniques and more for the shot put. 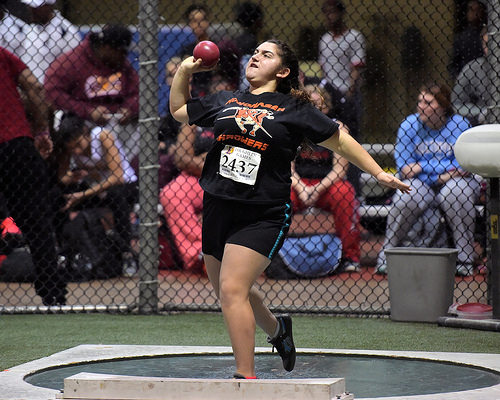 While picking up heavy things and seeing how far you can throw it goes back to the days of cave men, formal shot put competitions are a little more recent. The event was a part of the first modern Olympics in 1896 for men and were added for women in 1948.

Variations of the event happened many years before then, as stone putting dates back to the classic Highland Games and cannonball throwing was an actual competition that soldiers would partake in through different countries. ​

Shot putting competitions as we know them began early in the 19th century and in 1866 they made their first appearance in the British Amateur Championships.

Put simply, throw the ball into the sector without leaving the throwing circle. The full rules are a little more complicated than that.

There are many other minor rules, but this covers the vast majority. One other note is that the thrower must actually "put" the ball. The ball cannot fall below the shoulders during the throw or go outside the vertical plane of the shoulders.

Below are the World records and the United States High School records for both genders, for indoor and outdoor track and field. You can find the complete men's and women's shot put world record progressions here. ​

If you are new to the event, there are a few different pieces of equipment that you will need. While the only essential items are a shot put ball and some open space, some other pieces will help, including:

Today, there are 2 predominant shot put techniques used - the glide and the spin technique. While many beginners start by practice with a standing throw, a half turn, or some kind of shuffle, they'll eventually want to learn one of these 2.

The glide consists of beginning with your back to the sector, exploding backwards into a power position, and then releasing. The details are a little more complicated than that, but you can get the idea from the video below.

American Parry O'Brien made the glide popular ​when he won 2 Olympic Gold Medals and set the world record an amazing 17 times between the 1950s and 1960s. Its popularity has lasted even till today.

The video below shows below shows the top 4 women's finishers in the 2013 IAAF Outdoor World Track and Field Championships. Those athletes were, in order: Valerie Adams from New Zealand, Christina Schwanitz from Germany, Michelle Carter from the United States, and Lijiao Gong from China. All 4 throwers competed with the glide technique.

The spin technique consists of a discus style spin with a release. Again, you can better idea of what it looks like in the video below. Aleksandr Baryshnikov of the USSR and Brian Oldfield of the United States helped popularize this form beginning with their success in the 1970s.

The video below shows the top 3 finishers at the 2015 IAAF Outdoor World Track and Field Championships in the Men's Shot Put. They were, in order: Joe Kovacs from the United States, David Storl of Germany, and O'Dayne Richards of Jamaica. Kovacs and Richards used the spin technique, while Storl is a glider.

While these videos of women primarily gliding and men primarily spinning, that isn't necessarily a good indicator of what normally happens. There is a mix of gliders and spinners throughout all genders.

Typically, in junior high and high school, throwers will first learn the glide because it is generally a simpler movement that has less moving parts. Certain athletes or coaches will decide if they believe the athlete has more potential in the spin.

Junior high and high school throwers still primarily glide, but the spin is becoming more popular. ​At the college level, it is a relatively even split. Many factors go into choosing a technique including height, speed, strength, coordination, and more.

There are many different opinions on what is best for shot put training. However, nobody argues that strength, athleticism, and technical ability are unimportant. The best way to go about achieving this is what is argued. There are 2 different broad categories of training:

The shot put is a fun and exciting event for both spectators and competitors. It can be a tremendous display of strength, but it also requires athleticism and technique to make a great thrower.