How Much Does Each Throwing Implement Weigh?

How much does a shot put, discus, hammer, javelin, or weight throw weigh? There are different weights for each for youth, middle school, high school, college/open and masters track and field. It can be tough to sort through all the information, so I created basic charts to make it easy to read and find what you are looking for.

Middle school can be tricky, because there isn't always a standard weight from state-to-state. It is best to check with your state association's rule book to be certain. ​Luckily, high school implements are standard across the United States. College and open weights are the same. Masters implements became lighter for older age groups. 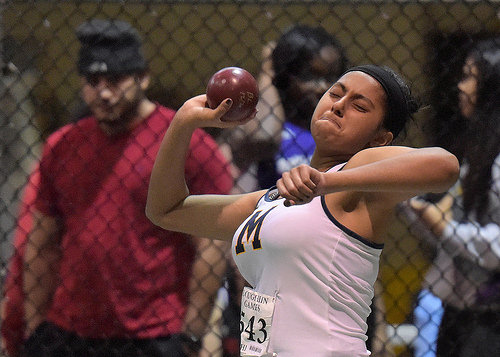 A common weight for middle school shot put is 8 pounds for boys and 6 pounds for girls, but this is NOT always the case. Check with your school or your state's association to verify. High school girls and college women's shot puts use the same ball weight. High school boys use a 12 pound shot put. College men use the 16 pound ball.

If you have an athlete competing in youth, ages 8 and up, you can see the USATF Youth implement specifications. ​

1 kilograms discuses are common in middle school, but, again check with your state's rules. The discus weighs the same for high school girls and college women, at 1 kilogram or just more than 2.2 pounds. High school boys in the United States use the 1.6 kilogram discus, which is just over 3.5 pounds. The college men's weighs 2 kilograms or just over 4.4 pounds.

The hammer implement is almost always the same weight as the shot put at each level. If you have a youth athlete who wants to compete in the hammer, check your local rules. The event is rarely competed at the high school level, but when it is, the boys use a 12 pound hammer and the girls use a 4 kilogram implement. Rhode Island is the only state that sanctions the high school hammer throw, but it is competed across America in open meets.

High school Javelin is only competed in 14 states in America, but it is competed across the United States in open meets. The standard weight for men is 800 grams or just over 1.76 pounds. For women, it is 600 grams, or a little more than 1.32 pounds.

The weight throw is growing in popularity for high school athletes in many states. High school boys use a 25 pound implement, while the girl's is 20 pounds. For collegiate and open competitions, it is 35 pounds for men and 20 pounds for women.

*Note: if viewing on a mobile device, slide the table left to right to view your needed event.

*Note: if viewing on a mobile device, slide the table left to right to view your needed event.

Masters track and field begins at age 30. At age groups from 50 and over, the competition implement decreases in weight. You can sheet a chart for men and women above.

Master's implement specifications are adapted from the USATF Master's website.

The super weight throw is exactly what it sounds like. A super heavy version of the standard weight throw. It isn't a well-known event, but it is a lot of fun to do. It is most commonly competed in open and masters USATF Association Championships, either indoors or outdoors.