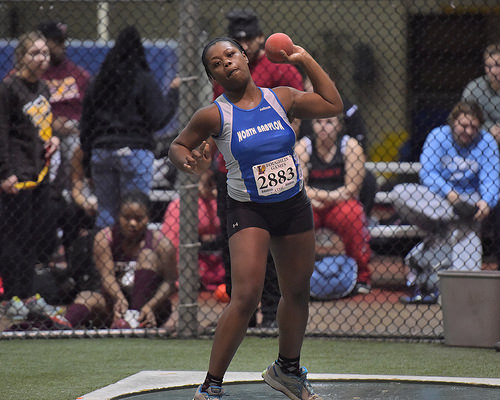 The national boys record in the shot put is one of the longest-standing records in high school track and field, but the girl’s record has recently been broken.

Below is video of Michael Carter’s record day in 1979. No one has threatened his mark in decades. Carter went on to attend Southern Methodist University to compete in track and field and football. He won the 1984 Olympic Silver Medal in the shot put and would have a successful football career with the San Francisco 49ers. Following the 1984 season, he would win a Super Bowl with the 49ers and he is considered the only athlete to win Olympic medal and a Super Bowl championship in the same year.

Ryan Crouser’s 2011 season has been the closest to threatening Carter’s amazing distance. He threw past 77 feet during the indoor season, which is a national indoor best. Crouser went on to compete in shot put and discus in college for the University of Texas. You can see video of his mark below.

Prior to Saunders outdoor record in 2014, Michael Carter’s daughter Michelle owned the record from a throw in 2003. Saunders had a dominant 2014 season, setting both indoor and outdoor national marks. Saunders would go on to compete for the Southern Illinois Salukis at the collegiate level in shot, discus, and hammer throws.

Nobody has seriously threatened Carter’s boy’s record in decades, which means we still could be a long way away from seeing it topped. The girls record was just recently topped and has become a seriously impressive distance that will be a real challenge to best.