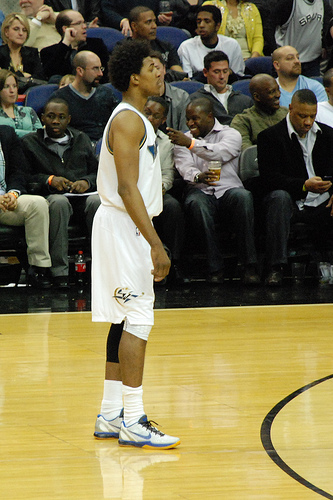 Nick Young is among the best leapers in combine history – Photo By: terren in Virginia

Vertical leaping ability is perhaps the most coveted display of athleticism for basketball players. Who are the best leapers in the NBA?

The active player with the highest vertical jump in NBA Draft Combine history is Nick Young of the Los Angeles Lakers, with a standing leap of 39.5 inches in 2007. The best vertical with a running start among active players is 44 inches, which was done by Shane Larkin in 2013 and Pat Connaughton in 2015.

According to the NBA, the Standing Vertical Leap (inches) is defined as “the vertical leap of a player with no running start”. Essentially, the athletes do a quick squat down and jump straight up in the air. They can do anything with their hands and legs before the test, but their feet can’t leave the ground before jumping.

According to the NBA, the Max Vertical Leap (inches) is measured as “the vertical leap of a player with a few steps to start and gather his leap”. Because athletes are allowed a brief running start, the heights are quite a bit higher.

Remember that not all prospects and incoming rookies – especially top 5 or lottery locks – actually compete in the combine. While this is disappointing for fans of the sport, those players have little to gain from a great performance and potentially plenty to lose from a bad showing.

It would be tough to argue that jumping ability doesn’t have an impact on basketball games. From getting a shot off over an opponent to blocking shots and rebounding, jumping has a big impact on both ends of the court. The measurement of the vertical also give scouts and fans a pretty good idea of overall explosiveness and athleticism. It is tough to jump really high and be really slow at the same time.

The vertical may be the most anticipated of the NBA Draft Combine Drills for fans. They want to see what their favorite rookie prospects can do. What the 40 yard dash is to football, the vert test may be to basketball.

Technique is also an important consideration. The person who performs best might not be the best jumper, they might just be more comfortable with the technique needed to excel at the test. Luckily for scouts this isn’t as big of a problem as it might be in other sports because the technique needed for a vertical test and that actually used to go up for a rebound on the basketball court, for example, are pretty similar. Yes, athletes won’t always be jumping straight in the air and need to be able to jump at angles, but this gives a good look at their capabilities.

It is definitely important to recognize the difference between the standing and max test. Many fans throw around numbers for what a certain player can jump, but context is important. The standing test does not allow any steps before jumping, while the max test allows a running start. Notice that there are no standing verticals of 40 inches or more, but each draft class has at least one athlete who could clear that with a running start.

Kenny Gregory put on one of the most impressive displays in NBA combine history back in 2001. He did a standing vertical of 39.5 inches and a maximum vertical of 45.5 inches, both insane numbers. Only the standing vertical has been matched, when Nick Young did so in 2007. Gregorgy, a 6’6″ shooting guard/small forward out of Kansas, went undrafted but has had a long professional career in other leagues.

Young’s performance at the 2007 combine was also very impressive. In addition to his 39.5 inch standing vertical, he had a 40.5 inch max vertical, which tied for 3rd in his class. Young went on to be drafted with the 16th selection in the 1st round of the 2007 draft by the Washington Wizards.

It is interesting to note the discrepancies between the different lists. Same players are able to get a major improvement from a running start, while others may only add an inch. Gregory, Matt Barnes, Ronald Dupree, Tim Bowers, Patrick Ewing Jr., Iman Shumpert, and Markel Brown are the athletes who were able to top their class in both the standing and max versions.

There are several athletes on these lists who have gone on to have very impactful careers. Young, Wesley Johnson, Iman Shumpert, Harrison Barnes, and Cody Zeller all went on to become 1st round choices in their respective draft classes and have varying degrees of professional success.