How to Play Point Guard at a High Level 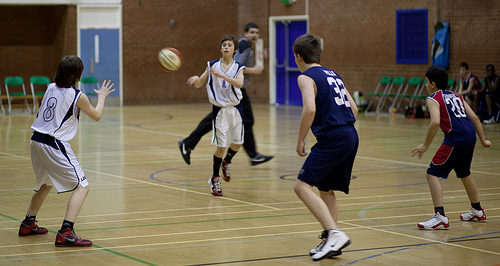 Do you know how to play point guard at an elite level? It’s not easy and requires a great mix of skills on the basketball court. The six main skills you’ll need to work on are:

The point guard has the basketball in their hands more than any other position. They need to be able to not only protect the basketball, but be able to attack weaknesses in the defense. A low and controlled dribble is difficult for the defense to get. Event so, you will have defenders trying to swipe at the ball every time you have, so you have to be very careful and protect it. That doesn’t mean to play scared though. It is important for you to attack the basket and be aggressive when you have your chances. You can see some dribbling drills here.

Passing is where point guards can really have an impact. Smart, quality passes can set up teammates for easy looks and cause the defense fits. You’ll want to become proficient in all types of passes, such as bounce pass, chest pass, and overhead pass, and from all angles. This can be anything from full-court passes to entry passes to the wing or the post.

While many team-first point guards crave assists, they shouldn’t focus on them too much. This can lead to forcing passes to teammates they hope are in scoring position. Instead, focus on taking what the defense gives you. Sometimes, you have to pass to the wing who can then hit the open post player. This doesn’t help your stats, but it can help your team.

Taking care of the basketball is extremely important also. Turnovers will happen when you are responsible for dribbling and passing so much. Just don’t make lazy or repetitive turnovers. Any aggressive player will make the occasional mistake, but do your best to limit them.

The amount of jump shooting you are asked to do depends on your offensive system and individual skill. A point guard who can knock down open 3 point shots can really space the floor for teammates. You’ll also need to be a scoring threat in other situations with the ball in your hands. If the defense doesn’t respect your ability to score on a pick-and-roll, for example, then they can pay extra attention to the player rolling to the basket. This can congest things on offense and make it difficult to get them the ball. You don’t have to be Stephen Curry to run a successful offense, but the defense should respect your ability to score.

In man-to-man defense, you’ll generally be matched up with the other point guard. This means you’ll have to be able to stay in front of the basketball while being able to prevent any easy jump shots, particularly if you are defending a quality shooter. You’ll have to know your team’s strategies on ball screens. You may have to fight over the top of the screener, underneath, or just switch.

You may sometimes be cross-matched on a different position. This could be because of a defensive switch or the coach’s decision on matchups. In this case,  you’ll need to understand your matchup’s strengths and take them away. If you are guarding a bigger player in the post, for example, you’ll need to take away the easy path to the basketball, hope help is on the way, and make the shot as difficult as possible.

Your responsibilities on zone defense will be very dependent on what zone you are running and what spot you are playing in the zone. Usually, you’ll be guarding somewhere on the perimeter or at the top of the key. It’s important that you close out on your matchup and are able to contest a jump shot while also preventing penetration.

Rebounding can be a team skill, like defense, and any weak link can lead to extra chances for the other team. Defensively, you’ll be responsible for boxing out and making sure your matchup can’t get the offensive rebound. On offense, generally you’ll be required to get back on defense after a shot rather than crash the boards. This is done to help setup the transition defense, although not all teams do this.

Being able to play point guard at an elite level requires a versatile set of skills. You need to be able help the team on and off the ball, both offensively and defensively.